On Day Four (catch up on days 1-3.5 here) of our great Western Europe road trip we departed Belgium, and drove in to northern France. We drove through bright sunshine, over rolling green hills, with steeples from tiny villages decorating the landscape, a chateau or two, and union workers striking on the highway. We were en route to the town of Bayeux in the heart of France’s Normandy region, which we would call home for the next few days. Driving through Normandy was tough for me, because as you may know by now, I have this problem where my brain fires in a million directions at once. I’ve said this before. Does anyone else have this problem? I know my bestie Liz does, but we can’t be alone. For example, ok, we are going to stop in Rouen, but if you look at the map, just 1 cm away are the famous Jardins d’Etretat, the town of Liseaux, home of Saint Therese and this other really cute village I read about on someone’s blog. And then of course, right next to Normandy is Pays de le Loire with the Loire valley, and I mean, hello! Wine and Chateaux! And so forth and onward, until I’ve gone too far and have to reel myself back in. So, how does one focus one’s energy? I’m repeating myself, but you just have to pick and commit. Then trust that if you’re meant to see everywhere else, life will bring you there eventually. That’s the problem with life, there just isn’t time to see it all. I’m working on it.

We stopped in the city of Rouen for one hour. It was a larger city that I’d expected. I don’t know what I was expecting, quaint, maybe? But it was trafficky and busy and we tried two parking garages that were both full before we found street parking. In this hour we walked a half mile down one street and saw: the site of Saint Joan of Arc’s burning at the stake in 1431, the church built there in her name, the massive Cathedrale Notre Dame de Rouen and a gorgeous 14th century astronomical clock.

I have since had to research astronomical clocks, because we saw one in Prague in November and I still didn’t really have a grasp on them. What I’ve learned, is that (depending on design) they can track the position of the sun, moon phases, planets and zodiac constellations, in addition to the time of day. Le Gros Horloge (literal translation “the big clock”) in Rouen, is one of the oldest and biggest of these type clocks. Its mechanisms were built in 1389 and it was set in the ornate arch above the pedestrian street in the 1500s. We walked from one end of this street, beginning at the site of Saint Joan of Arc’s execution, to the Rouen Cathedral. The latter is famous for being featured in a series of paintings by local artist Claude Monet. It held the title of world’s tallest building at one time in the mid-late 1800s. Standing below the cathedral, you can see how it held this tall honor. It is massive. Its facade covered with statues and carvings, bright yellowed white and so impressive you almost have a hard time believing you stumbled on it in an hour’s stop.

The Church of Saint Joan of Arc is relatively new, built in the 1970s. Its modern design contrasts with the surrounding traditional architecture. The highlight here, to me, were the lovely stained glass windows. The windows are actually reused from a 16th century church that stood nearby, but was destroyed in WWII. Its windows had been removed for preservation during the war and were built in to this new church honoring Saint Joan of Arc. The site of her execution is marked by a small sign in the middle of a small field of greenery, next to a covered outdoor market. Seemed strange to be able to buy your fresh fish, right next to such a gristly historical point. But that’s Europe, I suppose. Lots of gristly things have happened here, and history goes back a long way, so at some point you just have to build the next layer on top of it. That hour-long stop really packed a punch. 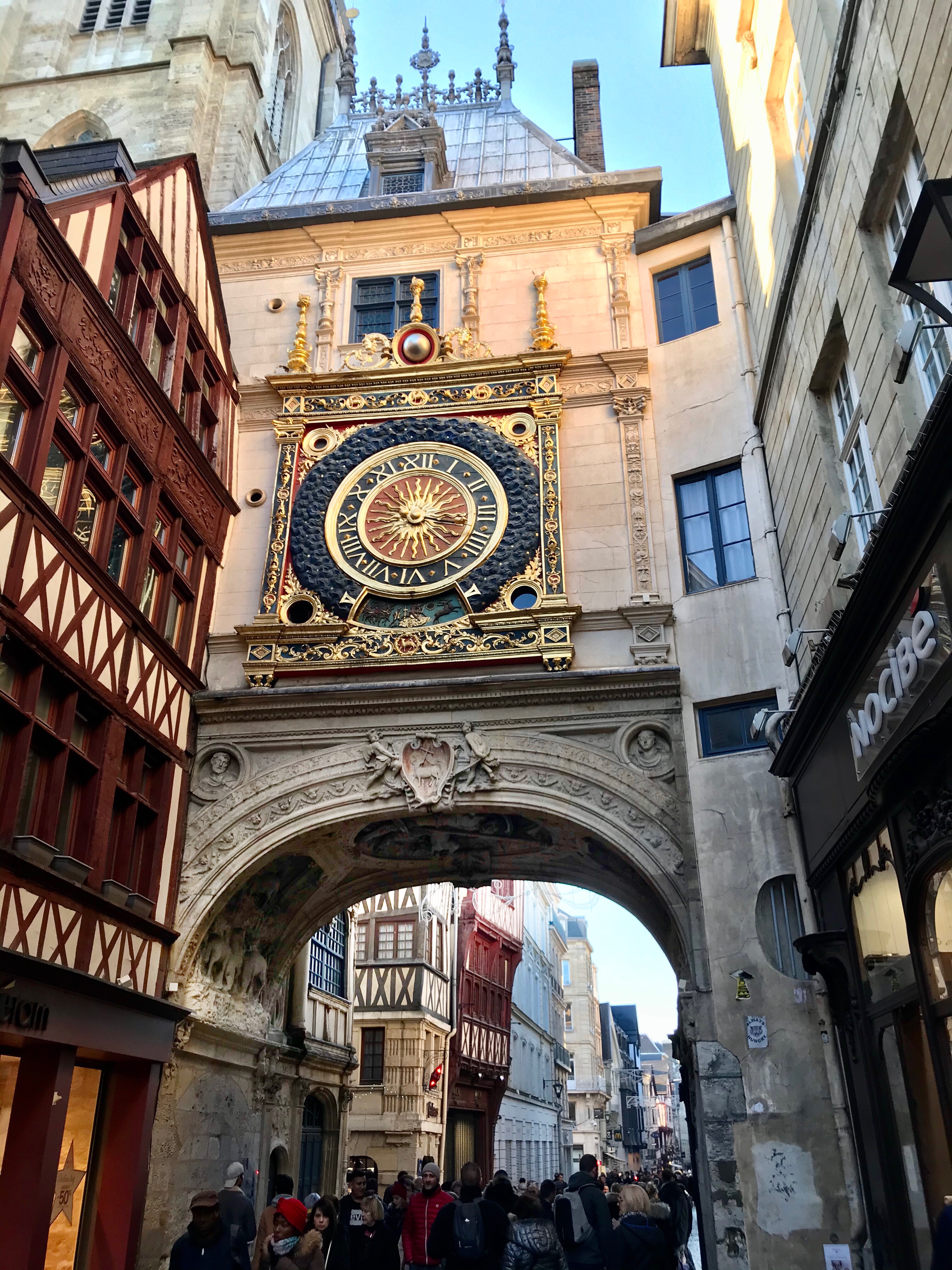 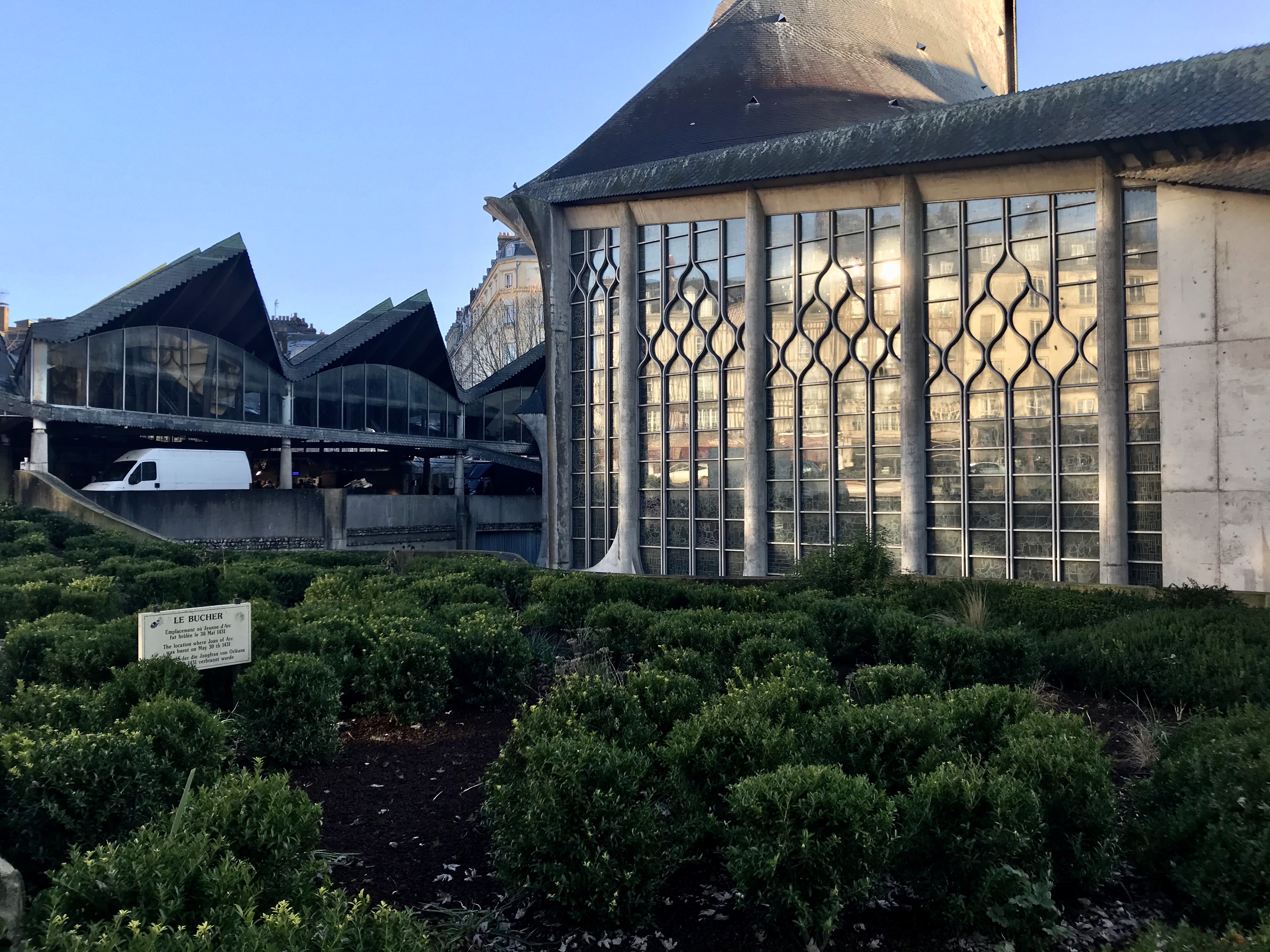 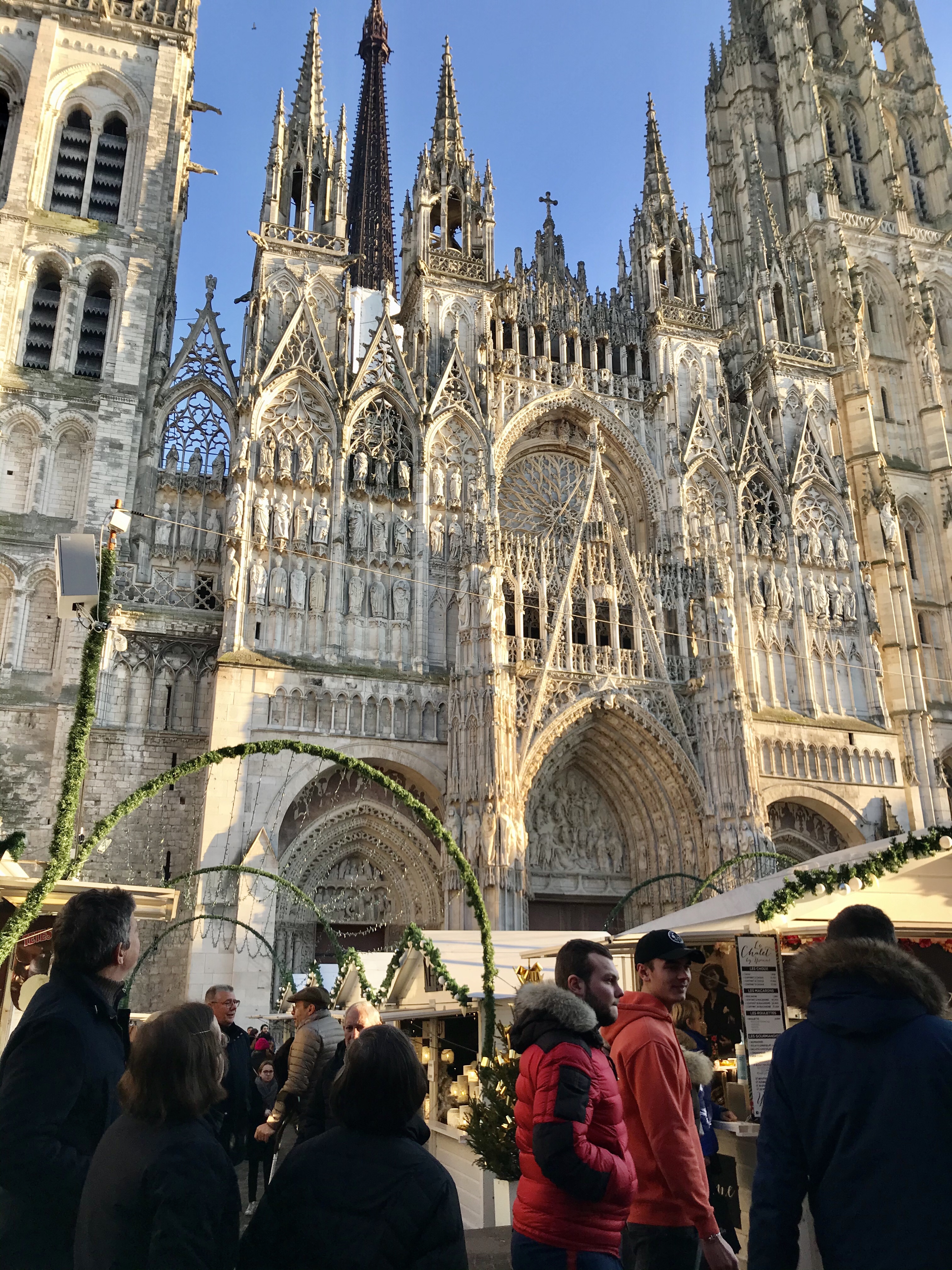 Day Five. New Year’s Eve 2019. We visited D-day invasion beaches Utah, Omaha and Pointe du Hoc on the English Channel. The weather set the mood. Foggy, damp, cold, still. We listened to Stephen Ambrose’s book, “D-Day: June 6, 1944: The Battle for the Normandy Beaches”, as we drove. As we passed through tiny villages I wondered about all the stories from inside homes and churches on that day and the days following. It was New Year’s Eve, and while museums and restaurants were all closed, we had everywhere we went essentially to ourselves. Utah beach reminded me so much of one of my favorite Lake Michigan beaches back home. If you’re from the West Michigan area, picture Rosy Mound after you descend the stairs. Low, grassy dunes separating the shore, scattered pine trees, soft yellow sand.

Pointe du Hoc was a much different and dramatic landscape, with sheer rocky cliffs jumping 100 feet up out of the Channel. I learned a lot here, I think, because it isn’t as “famous” (or at least not to me) as the other D-day landing sites. I had a lot to learn because I didn’t know anything about it. Like, how 225 US Army Rangers landed here, and scaled the cliffs to be the first to invade in the early hours of the morning. They took the site from 200 German soldiers with heavy cost, of the 225, 135 were killed or injured. I also learned what a bomb crater looks like after 75+ years. The whole area atop the cliff is pocked with now grown-over bomb craters that could easily swallow a truck or two. There were bunkers to crawl through, gun hideouts (surely that’s the official name) and pill boxes to peer in to.

Omaha beach was surprising, because there are new homes lining the shore and as you drive along it has a beachy vacation sort of vibe. I wonder what it looked like pre-1941? Again, I suppose at some point you just have to build upward and onward. We stopped by the American cemetery and Brandon got out and walked for a few minutes. I stayed in the car (who even am I?) and passed snacks back to two overtired, hangry little boys. It was raining by then and I opted out of my turn to take a peek. I paid my respects quietly as we explored the entire area that morning. Thanking God and those men for the courage to stand up to evil. 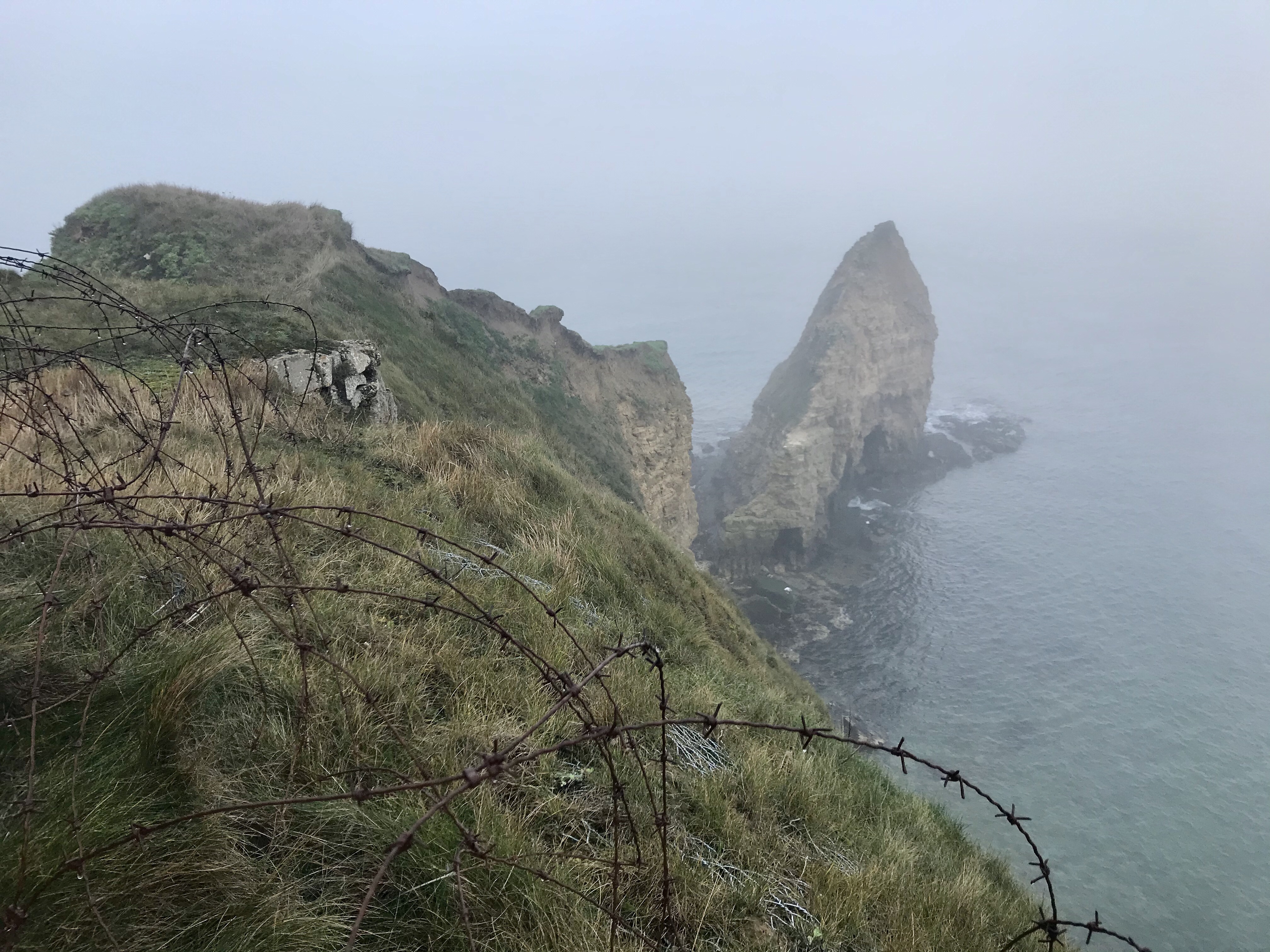 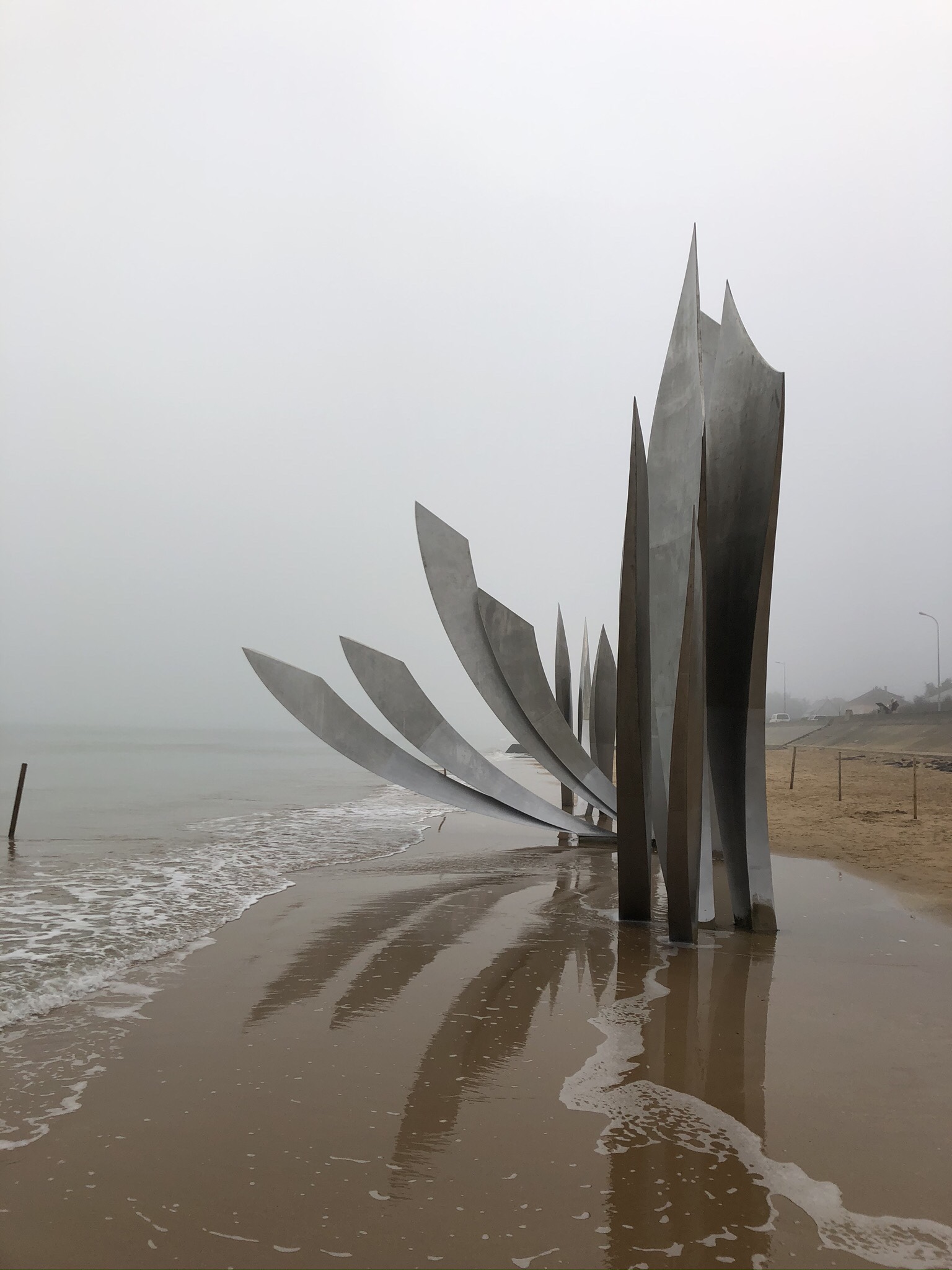 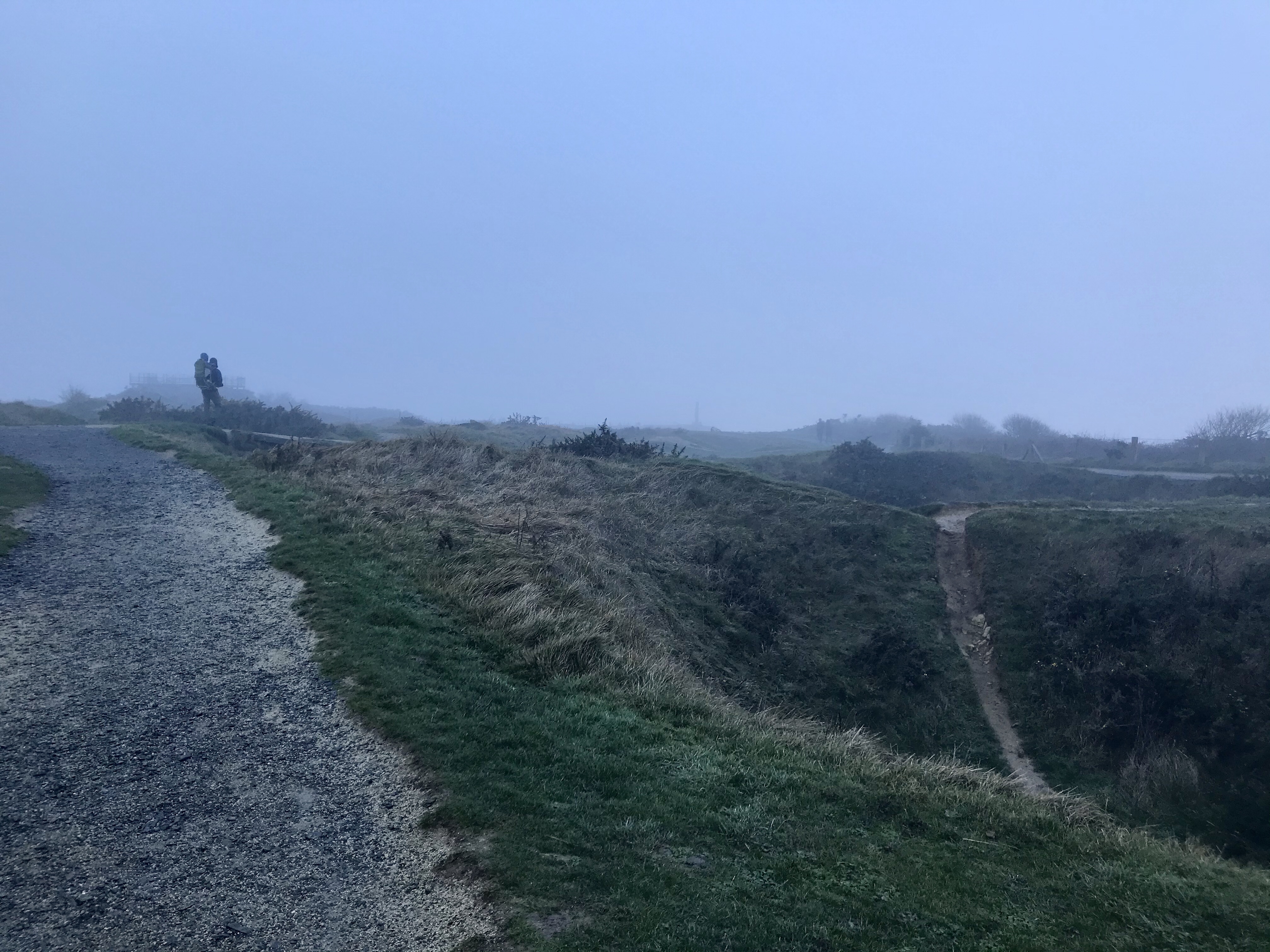 Day Six was New Year’s Day. One benefit to traveling with our children is that they force us to bed early, since no matter what, they are awake like clockwork at 0700. There’s no point in staying up. For me its not worth it to be exhausted the next day. I was briefly woken at midnight by the sound of fireworks the night before. I silently wished myself and my husband a happy new year and went back to sleep. We were up per usual and headed out to greet the new year in the peaceful morning quiet. It was a big day. I joke a lot about my bucket list being a living, breathing, ever growing, changing being with a life of its own. But ever since I was first introduced to it by Madame Henry in high school french class, a permanent item on this list had been to visit Le Mont Saint Michel.

Mont Saint Michel is an island fortress just under a kilometer off the Norman coast. Its history goes back two thousand years. It is surrounded by tidal flats, with one of the highest tides in Europe. You can park and walk the few miles over a low bridge to the island, take a free shuttle from the parking lot, or hire a guide to walk you over the flats to the island. We walked the bridge. I could not and would not shuttle myself on a pilgrimage. It was an absolutely disgusting morning weather-wise. Cold, misty rain and fog. My family are troopers. The island itself was a ghost, shrouded by the fog, revealing more and more of itself as we approached.

We had gotten there early in order to attend New Year’s Day Mass with the nuns, monks, and priests of the Mont Saint Michel Abbey. The Abbey is open to the public most days. A free ticket, obtained at the island visitor’s center, is required for entry. On New Year’s Day the Abbey is closed to visitors, unless you are attending Mass. Upon arrival to the island, wind your way up through the little village to line up at the Abbey door and a few minutes before Mass time, a nun will come and open it up and welcome you in. My husband joked afterward that this was the Mass he had envisioned from the moment he discovered I am Catholic. Long, cold, mysterious, unintelligible. The nuns and monks sang high mass in the ancient, unheated church with candles and incense and fog rolling in the back door. Since I knew this was once in a lifetime, I soaked it up. The Mass was prayed for global peace in the new year. I loved that I could celebrate this way, in that place. Despite differences in culture and language, but because of them so much more meaningful.

2.5 million visitors trek to Mont Saint Michel each year. The island itself has a population of something like 30. The great benefit of visiting in the off season, on an official holiday, was an almost complete lack of crowds. I had read that most everything would be closed on New Year’s Day and came prepared with packed sandwiches and snacks. But after Mass we wound our way back down to sea level through alleys, stairs and walkways and discovered shops and restaurants were open. We warmed up and ate lunch in one of the restaurants. The official food of Mont Saint Michel are these extra fluffy omelettes, created, as I understand it, to feed the hungry tourists who came to the island en masse. It was mostly air and not all that tasty. Mont Saint Michel reminded me of Michigan’s Mackinaw Island, having a rich and long history, but now mostly run for tourists. No offense, but I’d take Mackinaw Island fudge over a Mont Saint Michel omelette any day. Maybe these two tourist-driven islands should do a cultural exchange..omelettes for fudge. Now we’re talking. 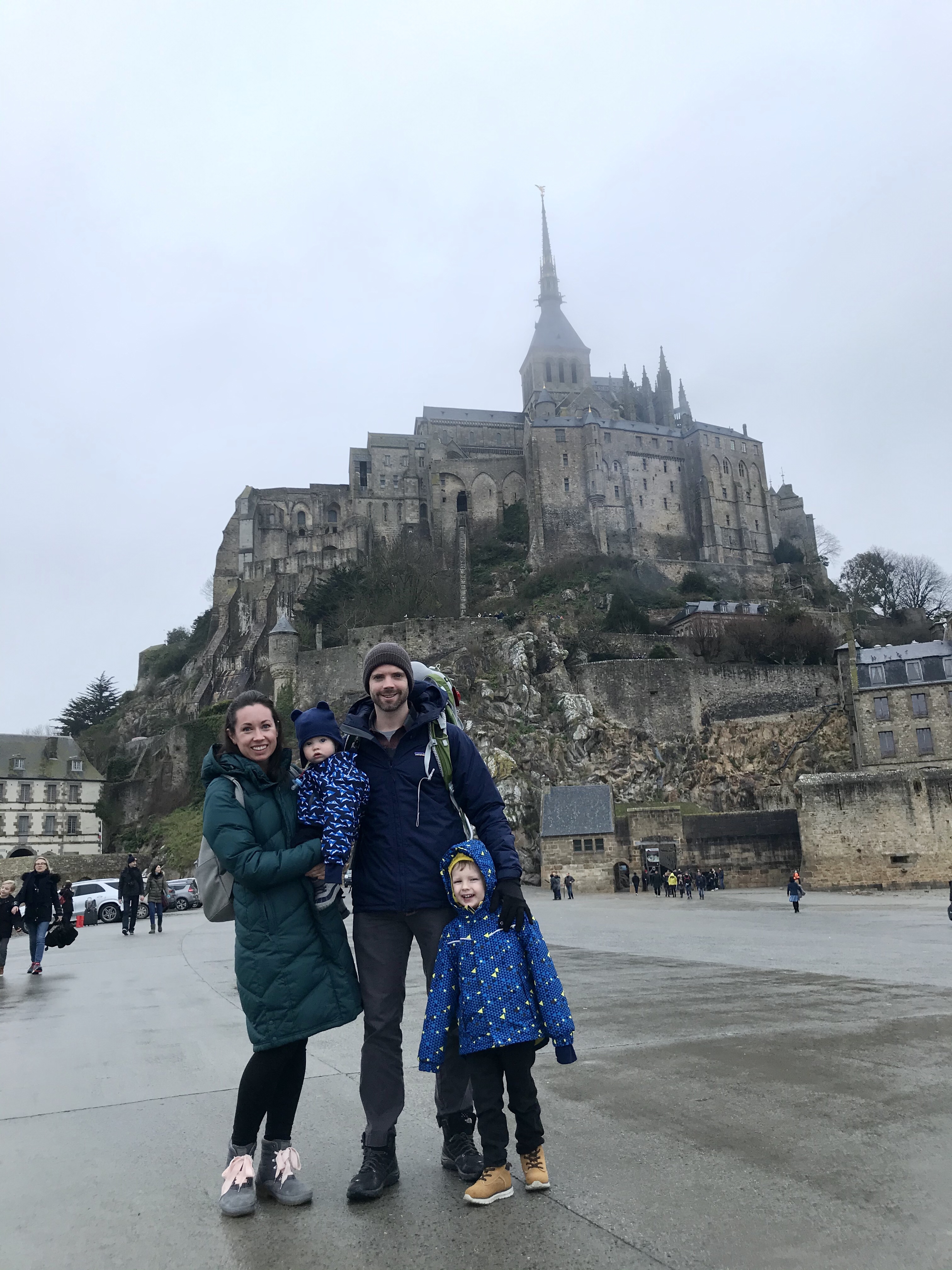 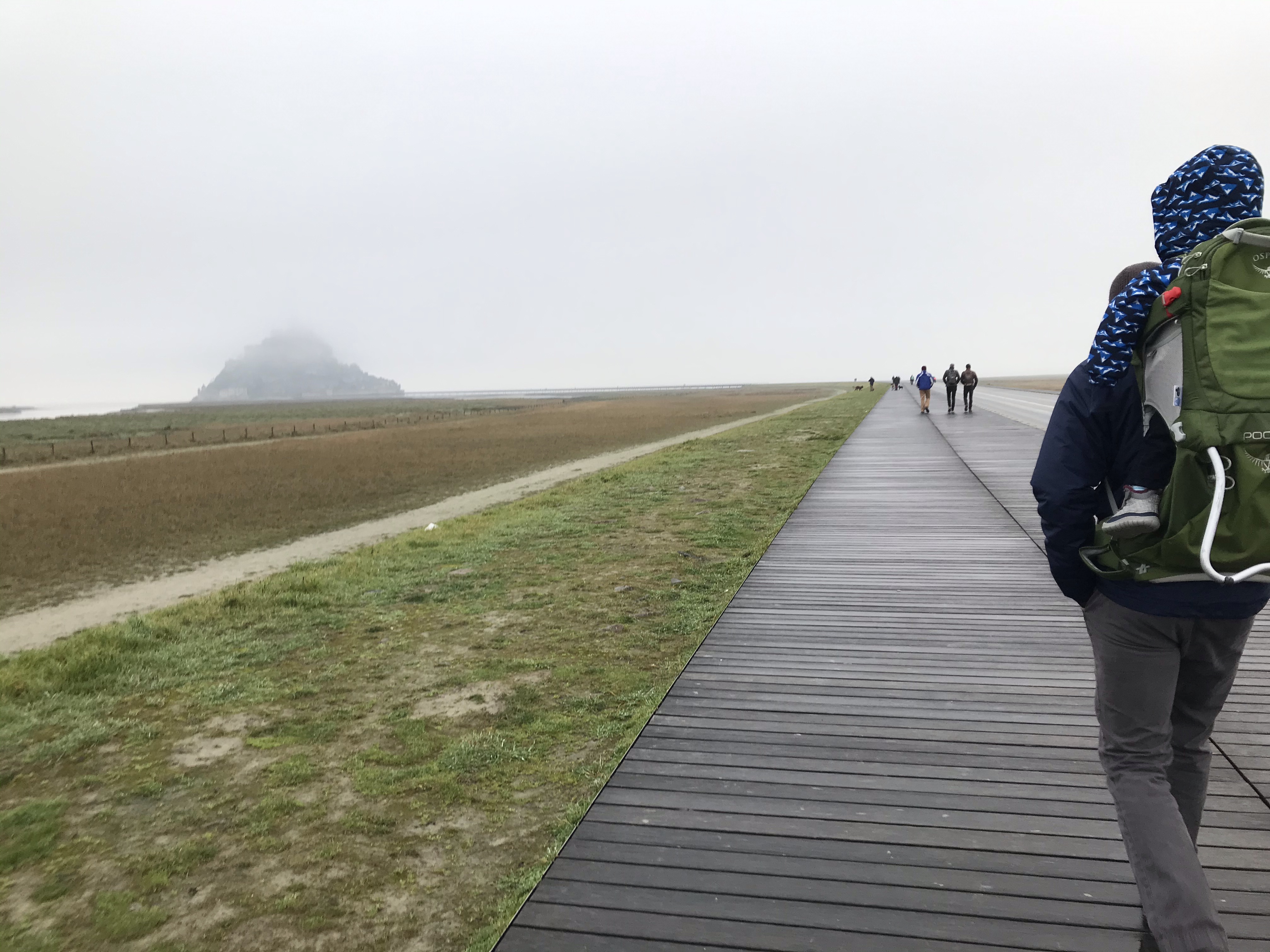 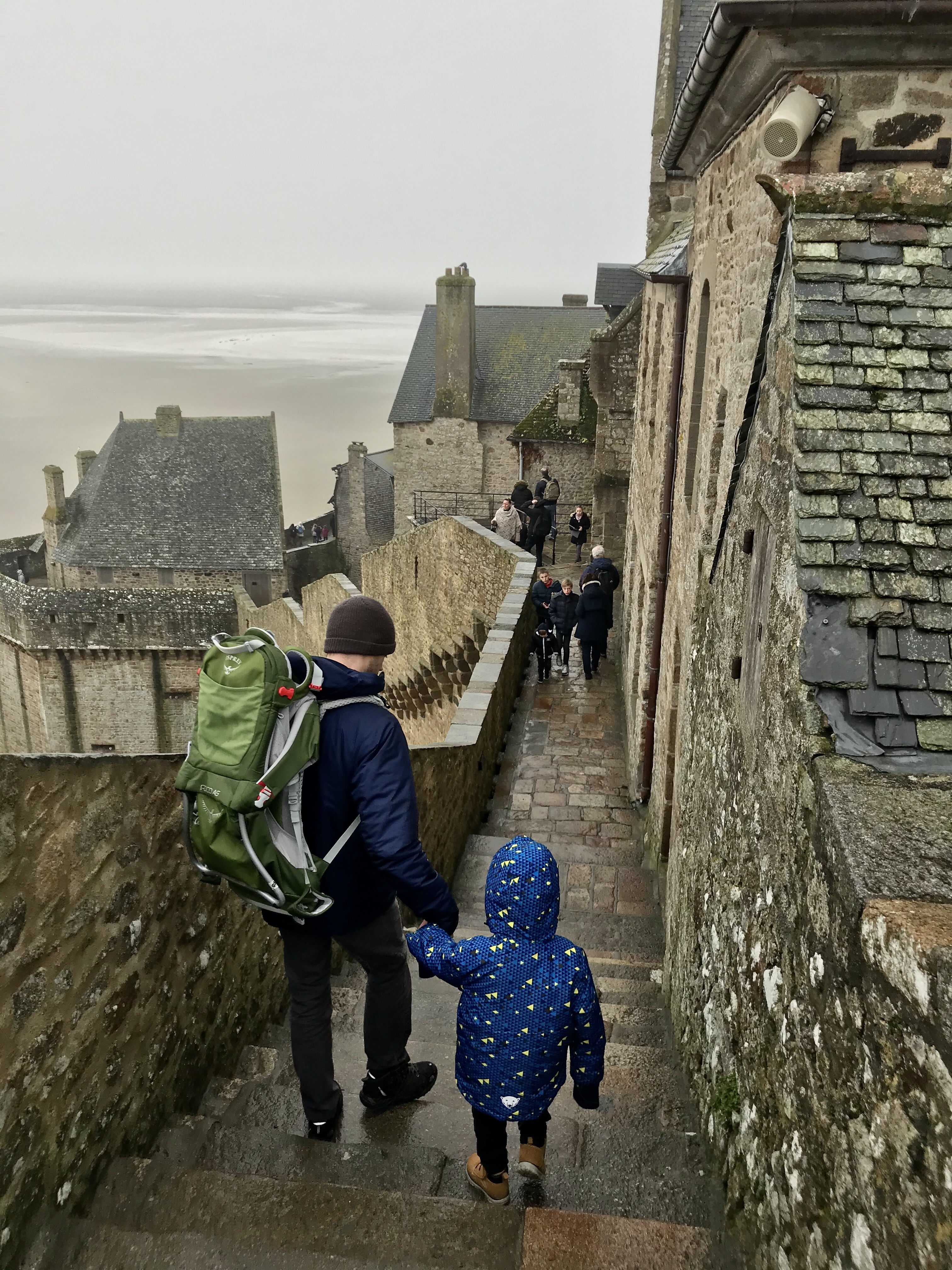 Pilgrimage complete, we took the shuttle back to our car. The hour drive to Bayeux was rainy and we spent the rest of the afternoon resting and wandering through town. Most everything was closed for the New Year. We ran in to this quite often on this trip. My best advice in these situations is to remain flexible and curious, and you will still have a very full experience. Bayeux itself was the perfect central location for our stay in Normandy. We could quickly get in and out of town, and had out-front parking in the cutest Airbnb. I’d have moved in if it weren’t for my real life. The town has an loooong history, having been settled since the 1st century BC. A gorgeous cathedral, a thousand year old famous tapestry that we did not see due to holiday hours, nap times and other planned excursions, and many shops and restaurants. I say this a lot, but I do not feel I am done with Normandy and should I return, I would like to again stay in Bayeux. 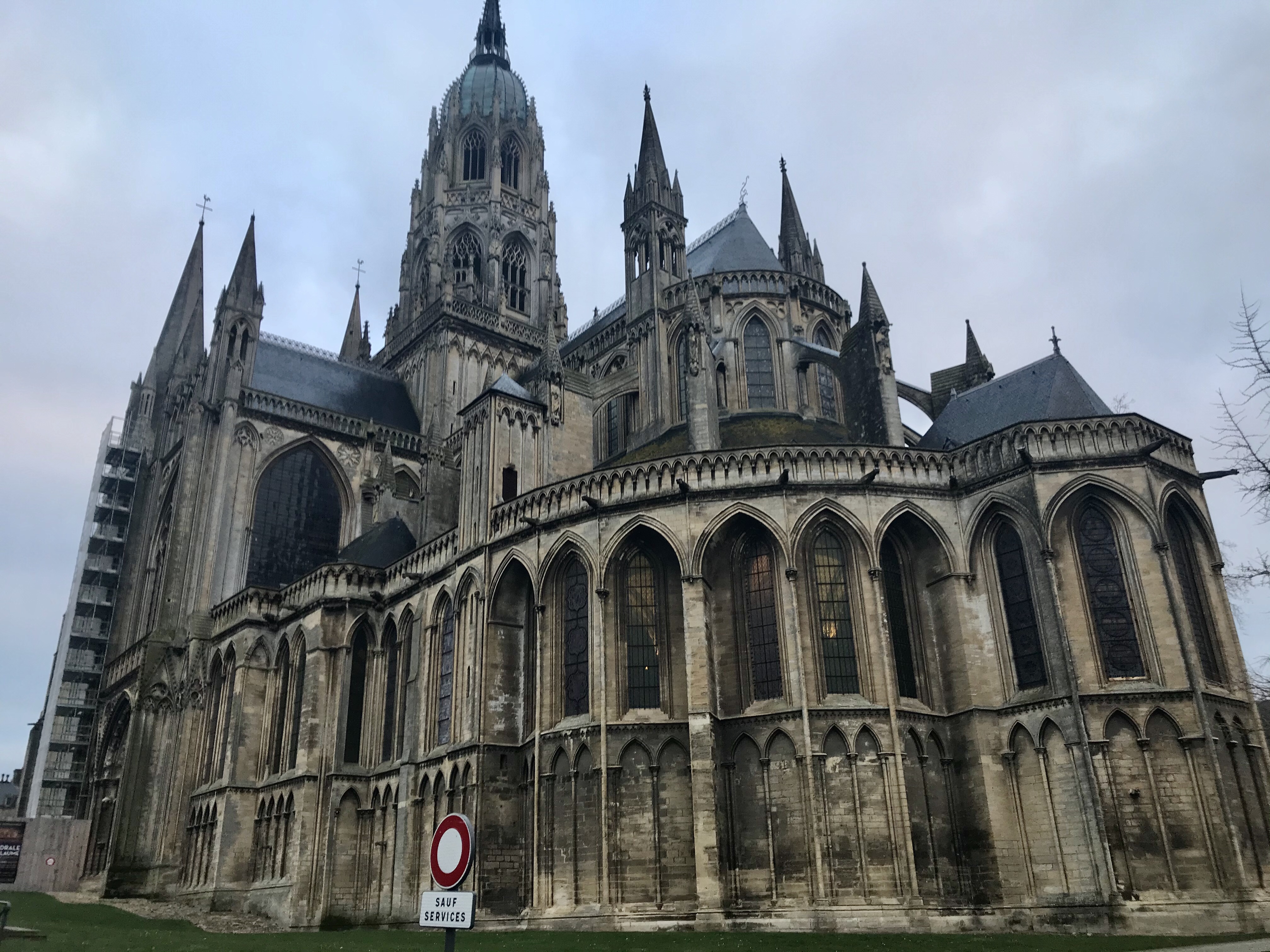 The next day was Paris day. Another place I had waited for my whole entire life. Stay tuned!