Your ready-made southern Baltic road trip itinerary: Copenhagen and Hamburg in four days or bust (the journey is half the fun)

When you come to visit Szczecin, Poland, I have your side-trip itineraries ready to go. Do you want to see a bit of the lower Baltic, hit four countries in as many days and explore two major cities? You’re going to want to add this one to your travel to-do list. Its a whirlwind, but totally doable and wonderfully family-friendly. However, adaptable for any stage in life, because we do travel with our kids but not entirely for our kids. If you want nightlife and fancy nice restaurants, stay up late and make yourself some reservations. If you want an extra day somewhere, add a night on your hotel rez. I’ve heard Malmo is cool, stay there for a day or two to explore and say you slept in Sweden. You’re passing by anyway. Easy. Ready?

Day One: On a Friday afternoon, drive about an hour north from Szczecin and take the 1300 (thats 1:00pm) Unity Line ferry from Swinoujscie, Poland to Ystad, Sweden. Now, there are a lot of different kinds of ferries in the world. Picture this one as a small sort of cruise ship. It has private cabins, a few restaurants, a bar or two, a casino (that wasn’t open when we traveled on the daytime crossing), several lounge areas with seating and a little play area with a ball pit and blocks and toys for kids. Park your car and gather a few things you’ll need during the seven-hour crossing (you can’t access your vehicle en-route), climb up the stairs and be greeted by friendly “pirates” holding baskets of candy. Check in to your cabin at the desk. There will be a twin bed, fold down futon and little bathroom with shower. Then go explore, grab lunch, and watch the ferry depart to sea from the channel of the Odra River.

I have decided that my favorite way to travel is by ferry. Its just so relaxing to drive on to a boat, sit back, and let someone else do the navigating while you breathe fresh air and stare off at the horizon. I’m not trying to brag here, but when we took the ferry, we set up the travel crib between the beds and ALL took naps. I believe in miracles. After your naps, go up to get dinner from the cafeteria-style restaurant. Let the kids play in the kid play place. High five your partner for rocking this travel-with-kids thing.

We departed the ferry in Ystad, and took a hard left toward the city of Malmo. The drive took us along the very southern tip of Sweden, through farmland that could have been anywhere. We passed an Ikea in its native habitat. We crossed the (approx) 5-mile long Oresund Bridge, spanning the strait between Sweden and Denmark. I couldn’t help but compare it to the Mackinac Bridge in my home state, connecting the upper and lower peninsulas of Michigan at the same length. I thought it interesting that the bridge has only been in operation since 2000. How did travelers get to-and-from prior? The bridge requires a toll, which we booked ahead of time to avoid having to wait at the toll booth to pay. We passed right through the gate, there wasn’t a line anyway. We drove off the ship at 8:15pm and by 9:45 we were parking our car at the hotel in Copenhagen.

If you are looking for your own Baltic ferry adventure, check out Unity Line ferries! To register your vehicle and prepay the Oresund bridge toll click here. 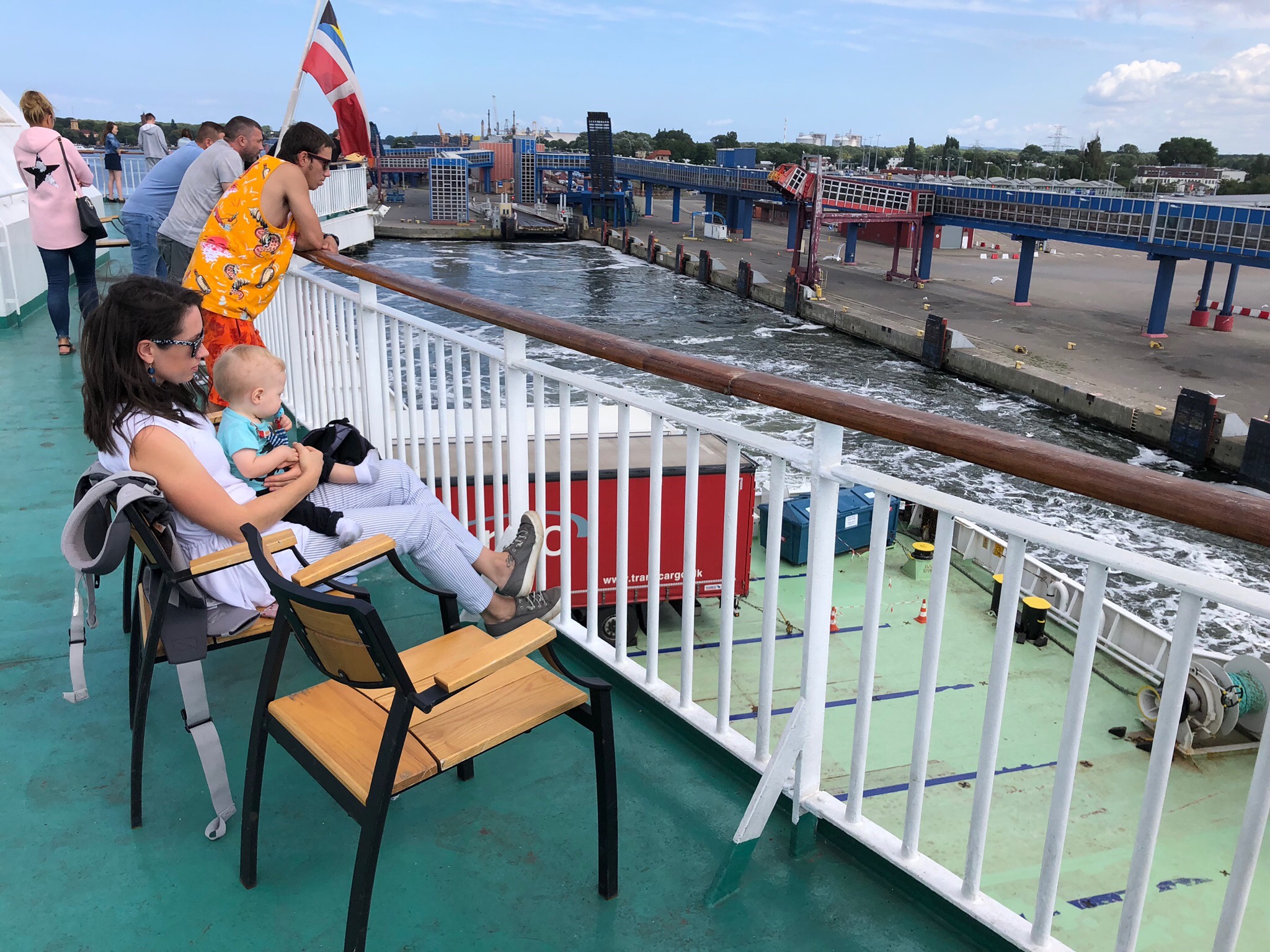 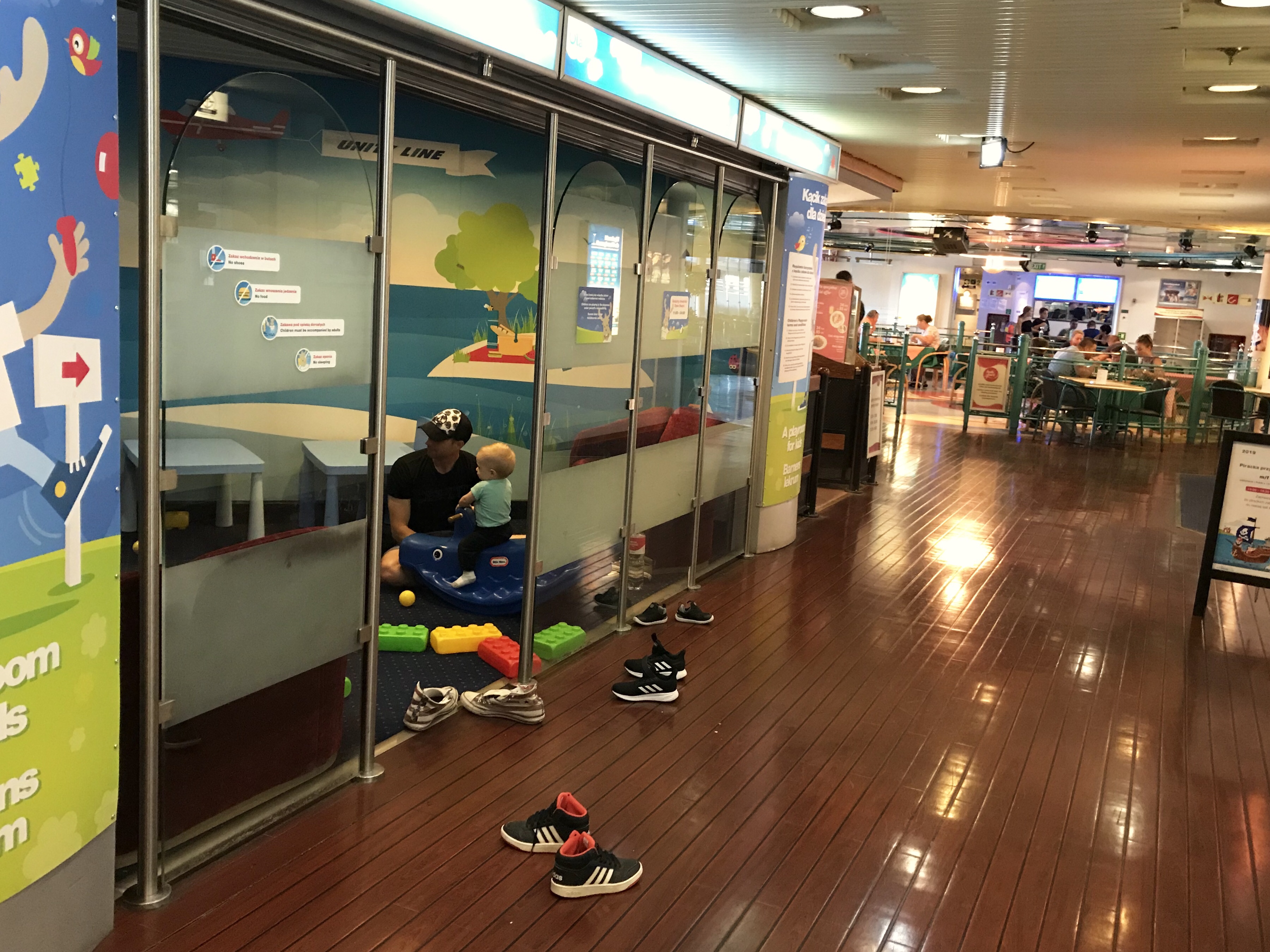 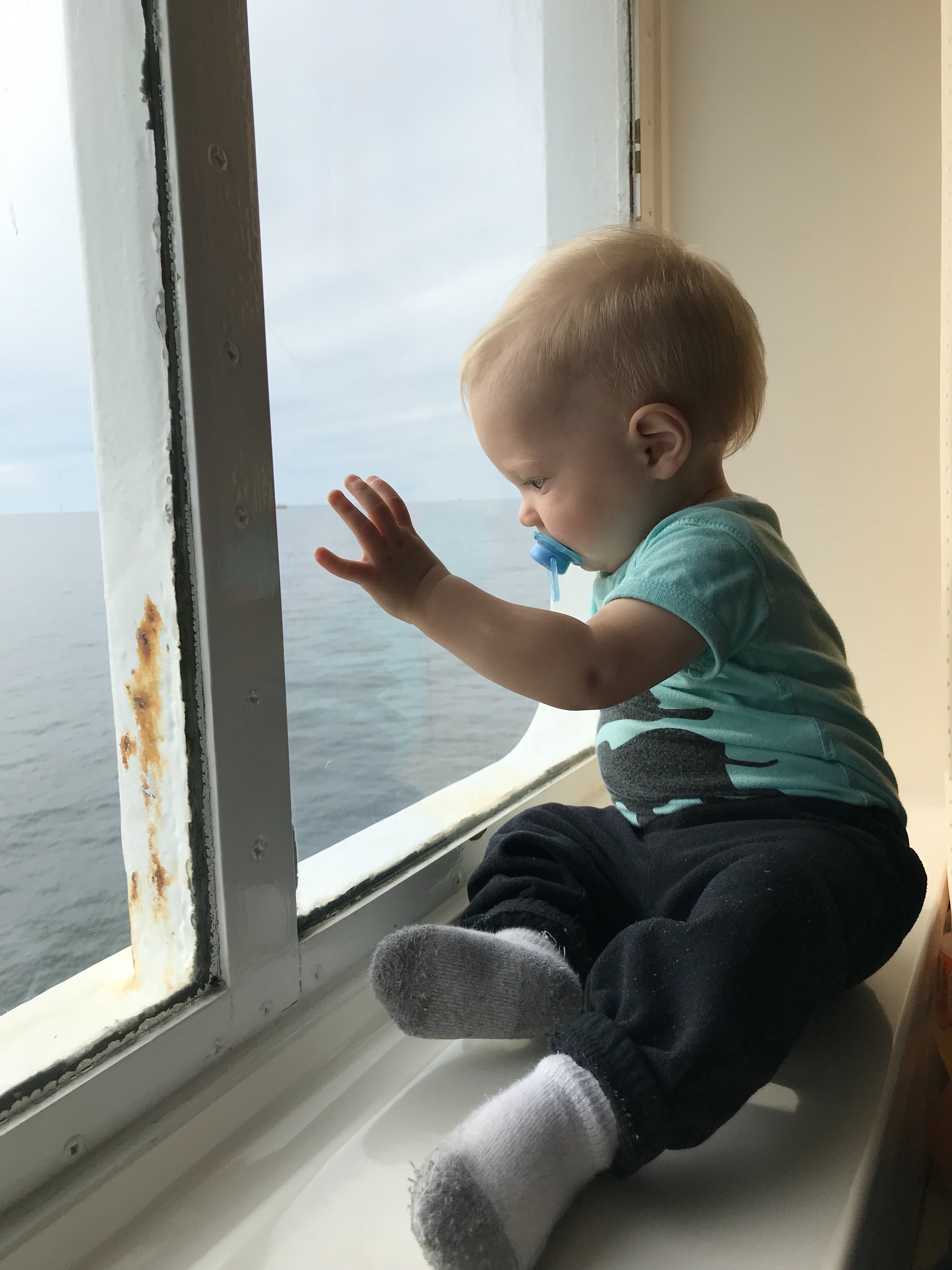 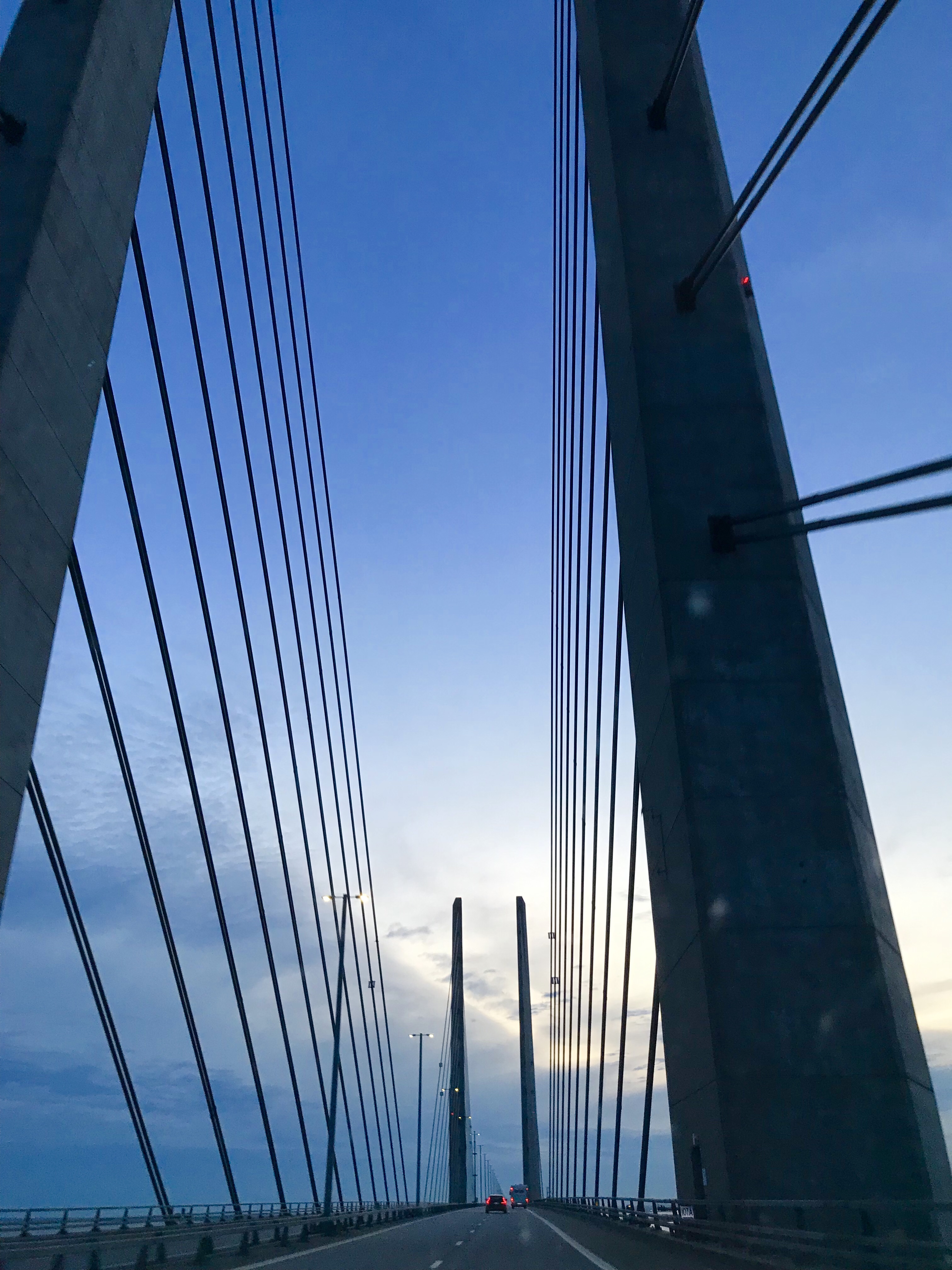 Day Two: Copenhagen was so pretty that I started actively looking for something ugly. Couldn’t find it. Even the back alleys were attractive. We’re becoming expert weekend wanderers. For the most part we’re on our feet. Its the best way to see and get to know a place. I know, I’ve advocated for down time during family travel in the past, and that still holds true for longer trips, but we’ve found that our kids (and the parents) are ok being out all day for a short trip. We’re home before anyone is truly overtired and recover on the back end.

You can hit many high notes in just under two days in Copenhagen. Wander through City Hall square and say hello to Copenhagen’s own Hans Christian Anderson statue to one side, down a pedestrian zone lined with as much shopping as you could ever want. Pop in to couple of cathedrals as you pass. If your timing is right, like ours happened to be, both church organists may be having practice sessions. If you’re an emotional sap- like I happen to be- hold back tears as it sounds, looks and feels like the closest thing to heaven, this side of it. Go up the Round Tower, a 17th century astronomer’s observatory, which I recommend for 360 degree rooftop views of the city, a bit of history, and a dizzying walk up and down the spiral ramp that takes you to the top and back. Don’t not get coffee in Copenhagen. Be sure to pause for a cup at one of the many pretty little coffee shops you will pass. Enter the King’s Garden and walk over the moat bridge to the grounds of the castle. If you like, you can go in the castle. If you’re exploring with your kids, sniff out the King’s Garden playground. After that walk over to infamous Nyhaven Wharf for lunch. It might be insanely crowded. Have patience and you will eventually get a table at one of the many restaurants lining the canal and enjoy an outdoor meal and people watching.

You must, must, must go to Tivoli Gardens. The world’s second oldest amusement park, built in 1843. It isn’t terribly large. It sits on a square city block, quite centrally located, next to Copenhagen Central Station. You can’t miss it. Even if you aren’t in to amusement parks and rides, go for the cultural experience, the food, the drink and the eye candy. The grounds are incredibly picturesque. A not-so-secret garden, walled off from the city. Tivoli Gardens is not just for kids. Play on the pirate’s playground. Take your kid on his first kiddie roller coaster ride, find a tap house and get a beer in a souvenir plastic cup. See if there are any performances at the outdoor theater. When we were there, the Copenhagen ballet theater was doing a demo performance on stage. If you’re hungry, or it starts to rain and pop indoors to the Tivoli Food Hall with food counters of many of Copenhagen’s popular restaurants represented. Eat gelato on the way back to the hotel and call it a very full day. 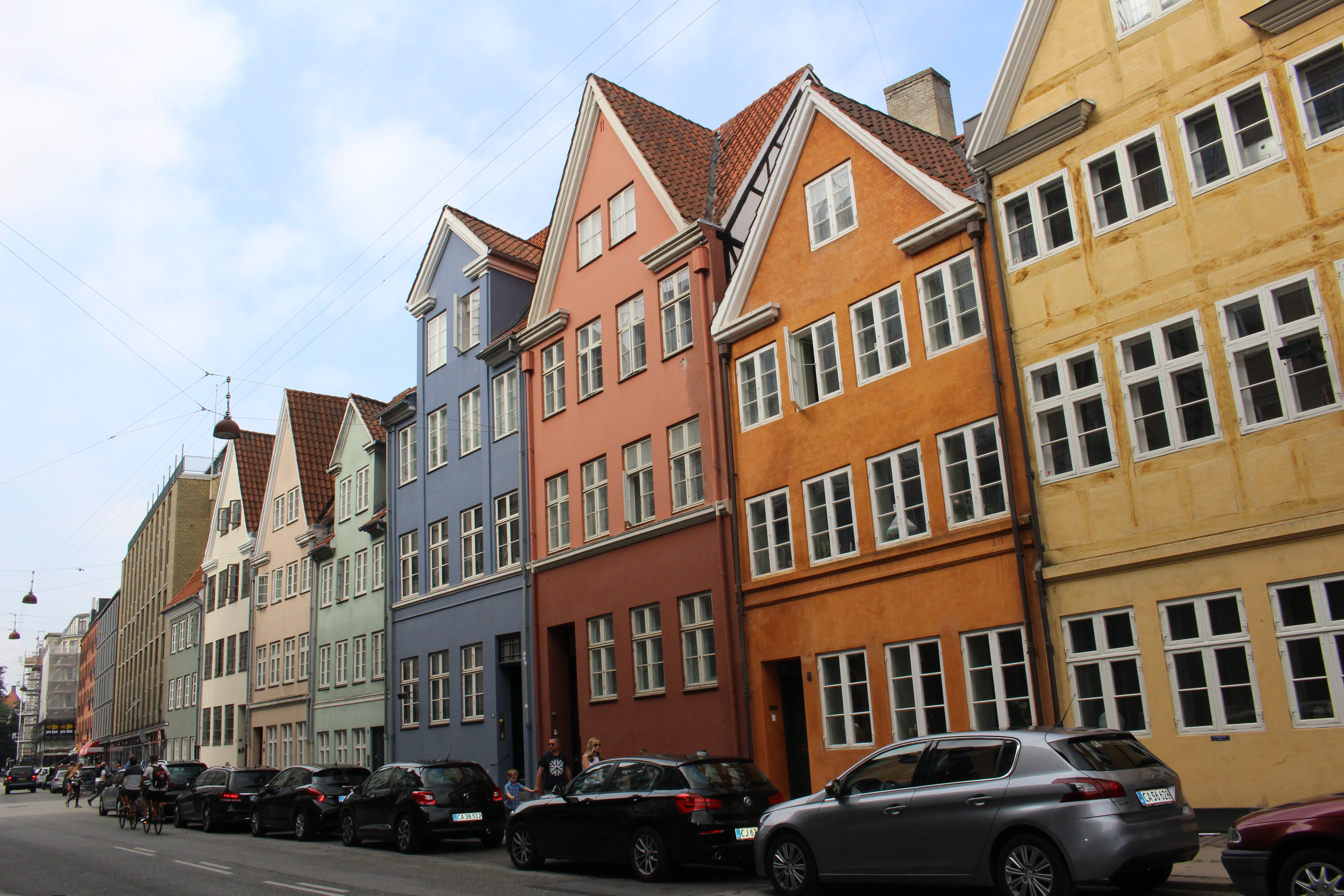 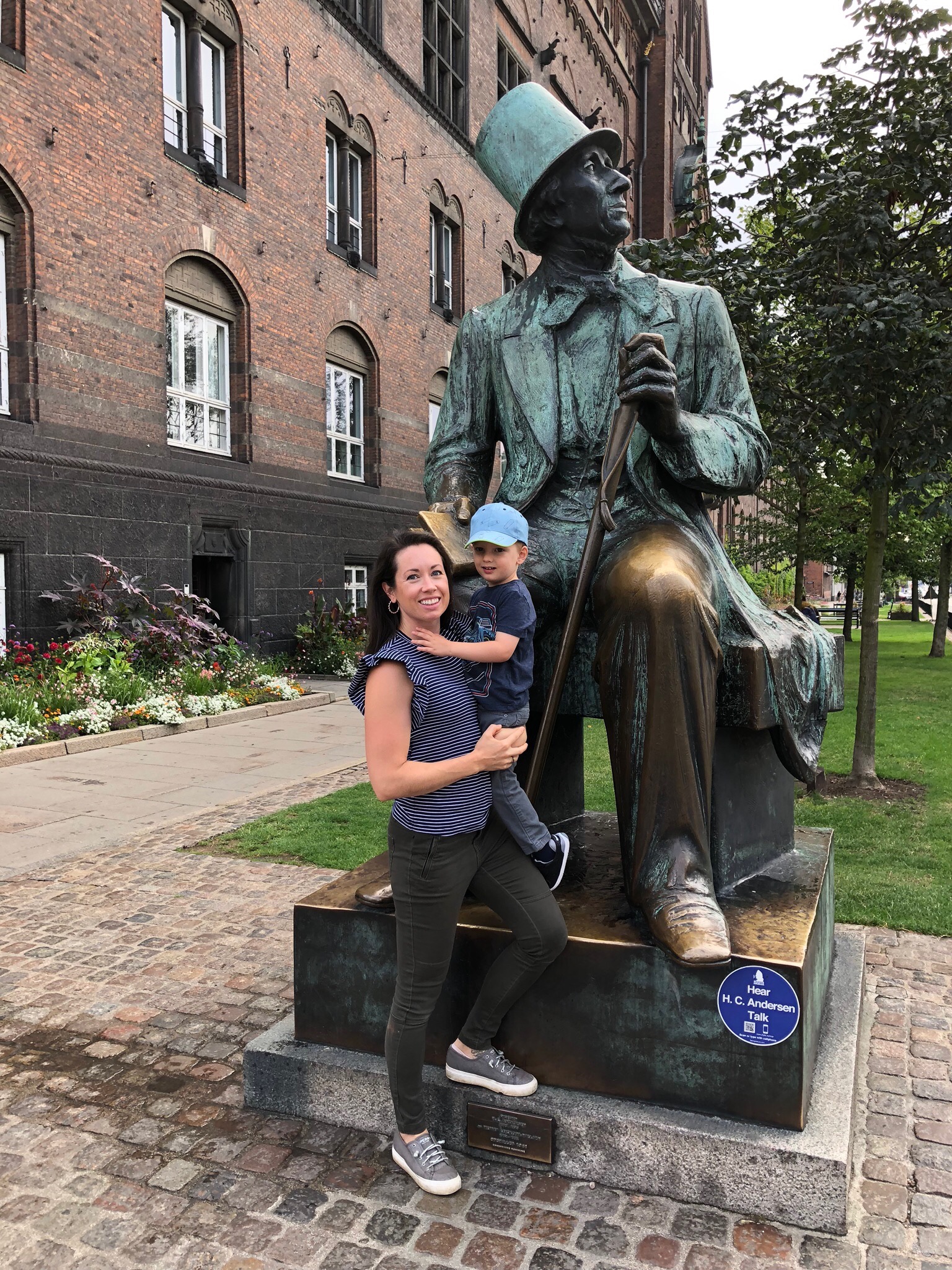 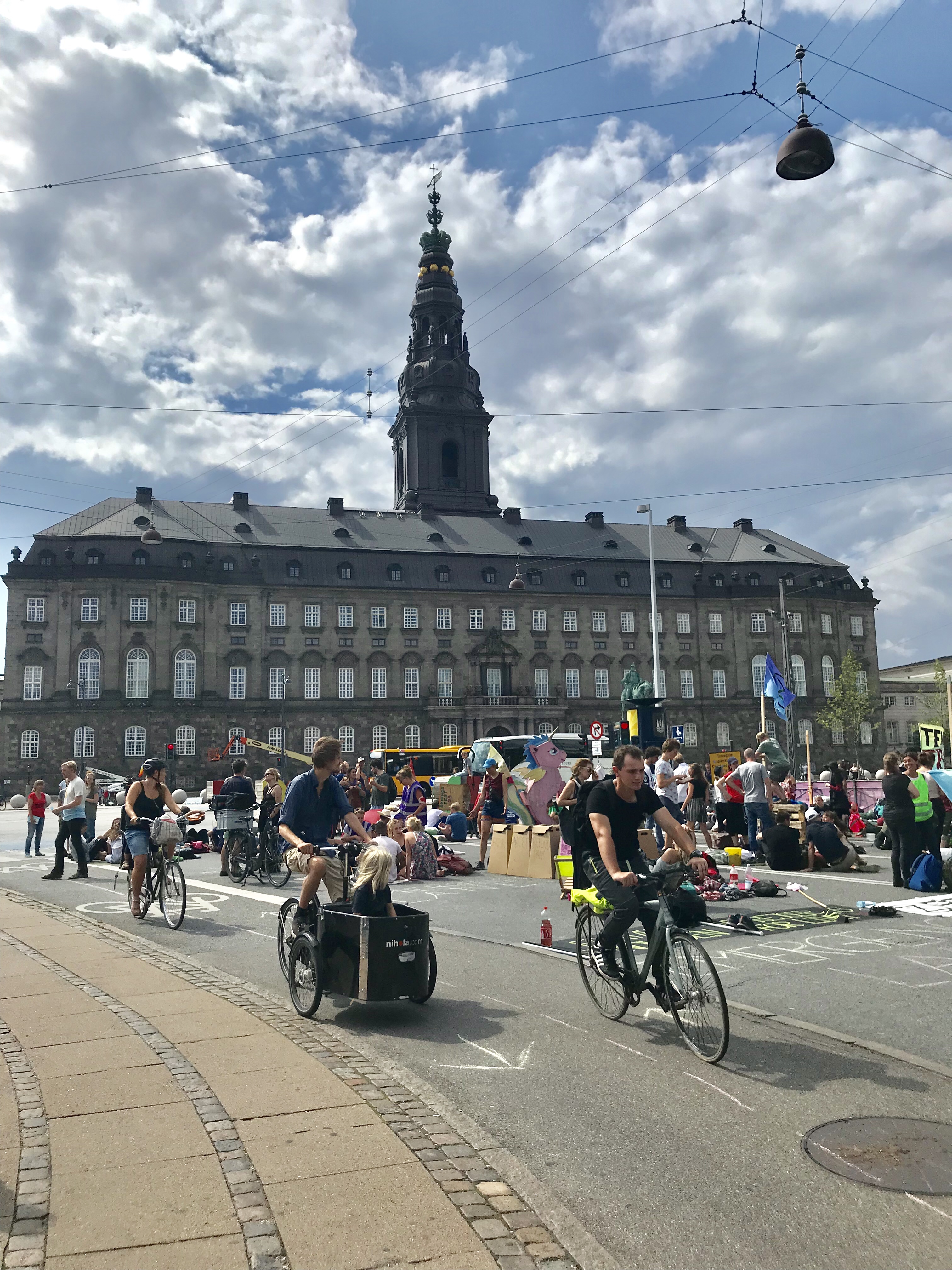 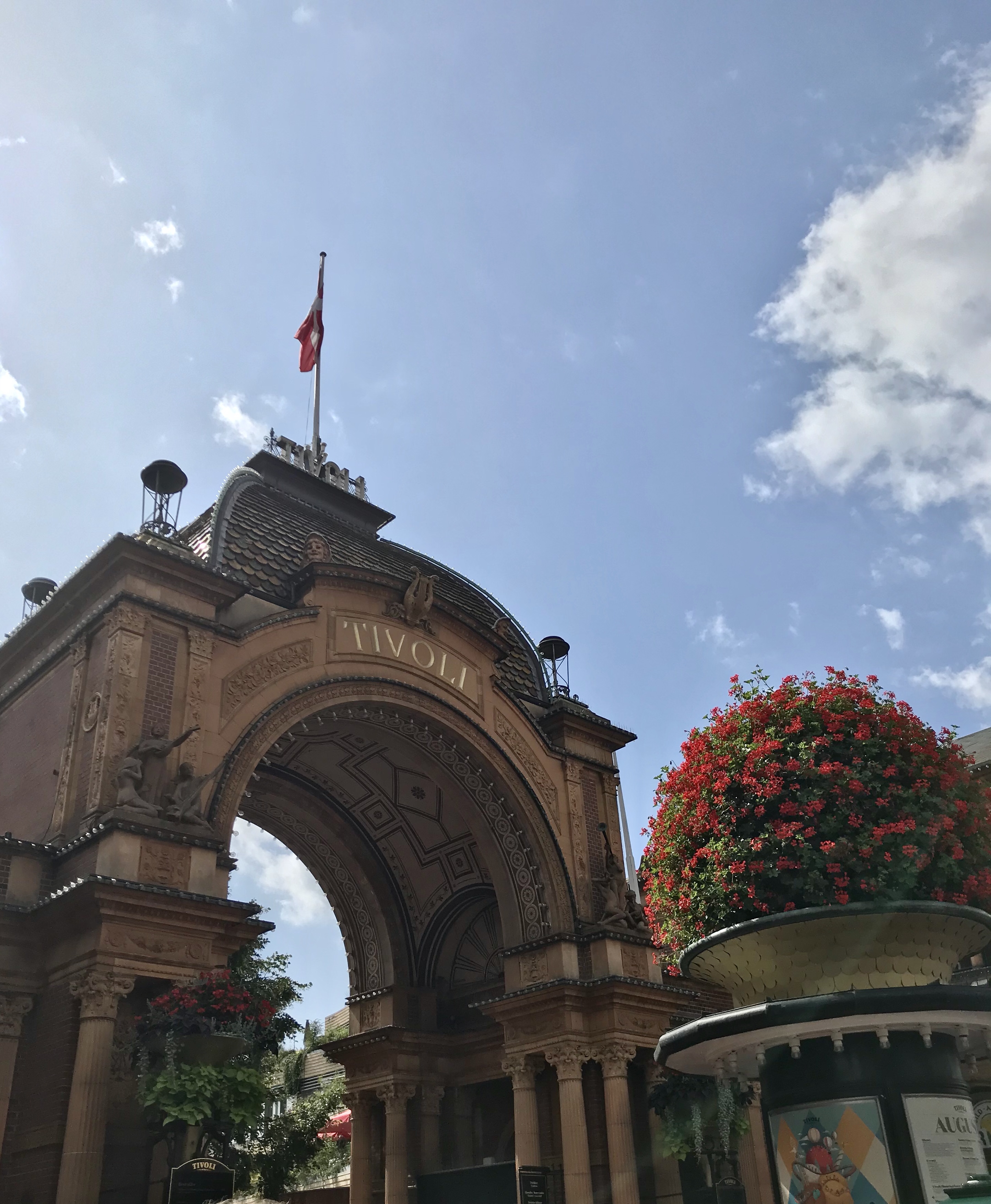 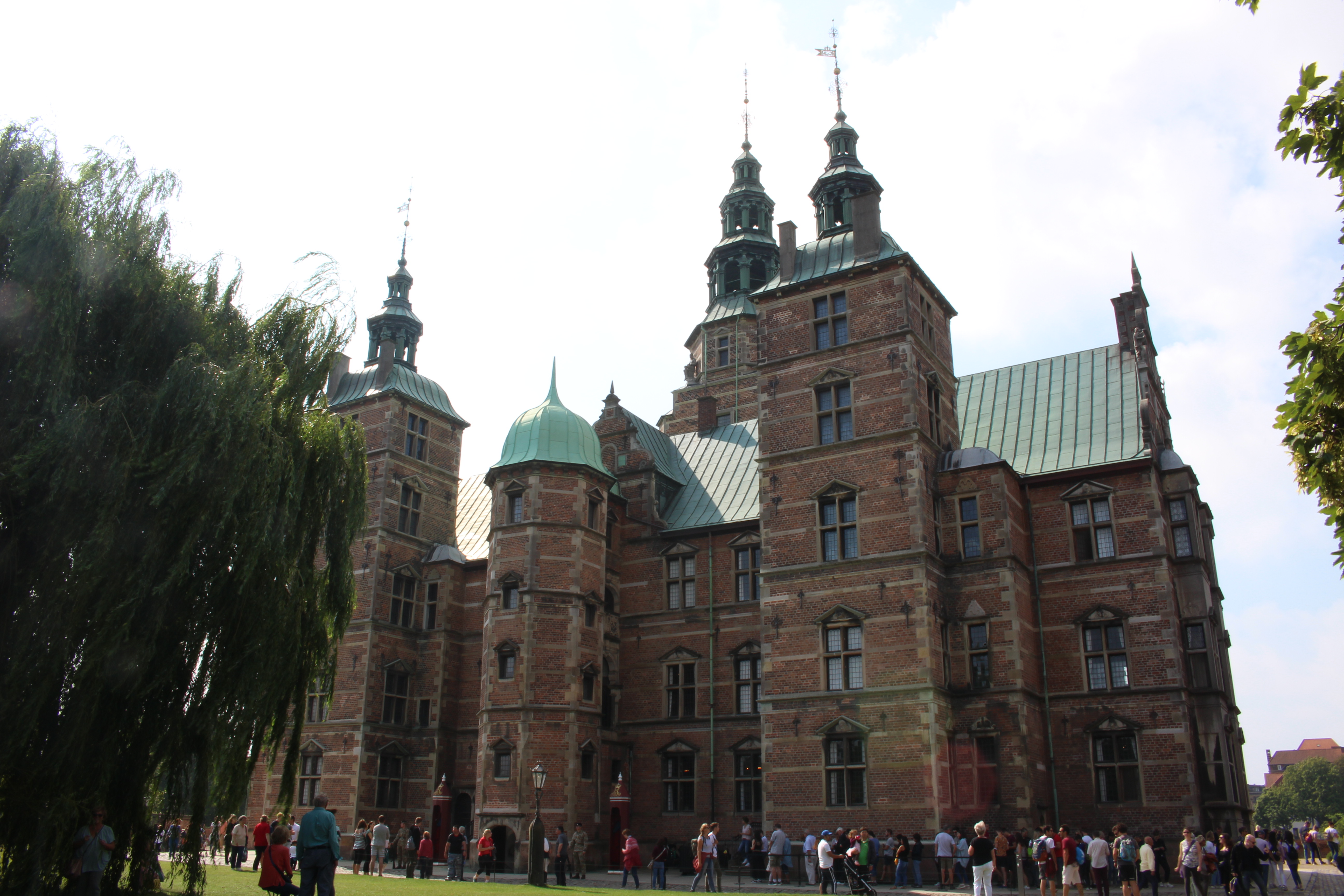 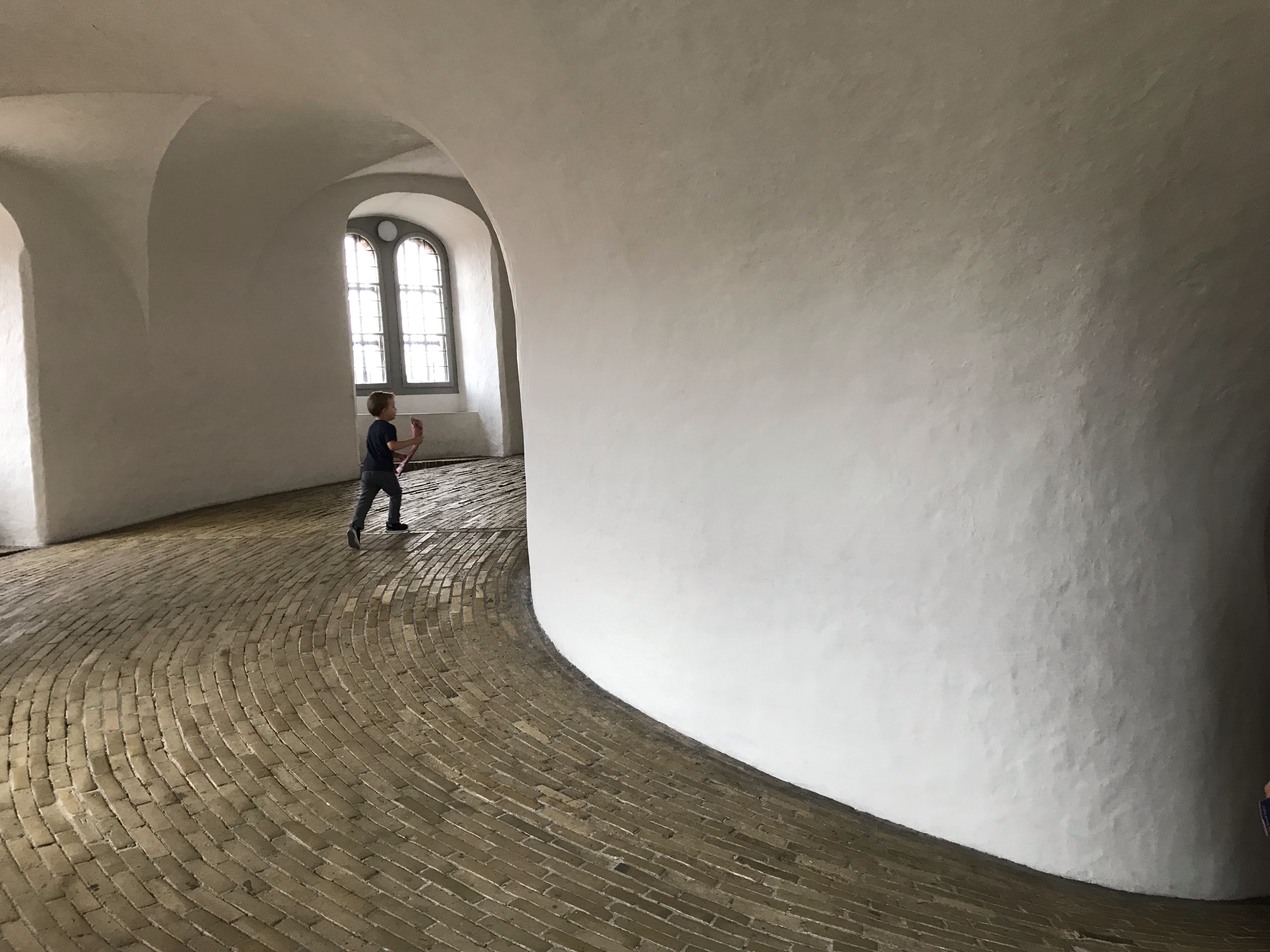 Day Three: Wake up! Duh. Grab a quick breakfast and a taxi out to the park where The Little Mermaid statue is located. If you, like we, arrive around 9am, the tour buses will already be lined up, unloading her adoring fans in large crowds. The original H.C. Anderson story of The Little Mermaid is more complex and interesting than its Disney fluff cousin we are most familiar with. The statue’s body is modeled after the sculptor’s wife and her face is the ballerina who danced the part for the Royal Danish Ballet. She is placed just about a meter off shore, with the industrial port as her backdrop. I’m sure she is never lonely where she sits.

After completing your Little Mermaid pilgrimage, walk back toward the main part of town. Past more churches and sculptures, canals, coffee shops and the Royal Danish Palace. Back through the pedestrian district and to your car, parked at the hotel.

Depart Copenhagen around noon and drive south through the Danish countryside, to the small peninsula town of Rodbyhavn. Here, hop a 45 minute ferry over to Puttgarden, Germany. Again, a round of applause for the Baltic ferries. Your kids can romp in another ferry play place and you can eat ferry restaurant schnitzel for a late lunch. You will drive off the ferry on to a very northern Baltic tip of Germany and make our way down to Hamburg. The total travel time from Copenhagen to Hamburg is an easy four hours.

If you, like me, arrive in Hamburg having no expectation of Hamburg. If you know very little/nothing about its history, its industry, its look, its feel, anything. You will leave Hamburg so pleasantly surprised at what you found there. It is a beautiful city. Are all European cities gorgeous? I’m beginning to believe so. After dropping your gear at the hotel, walk around the Alster Lakes. The area reminded me of D.C.’s Tidal Basin. But with restaurants on one end and a little larger, perhaps. Stop for dinner at a nearby restaurant, complete your walk around the lake. The kids are tired. Call it a day. 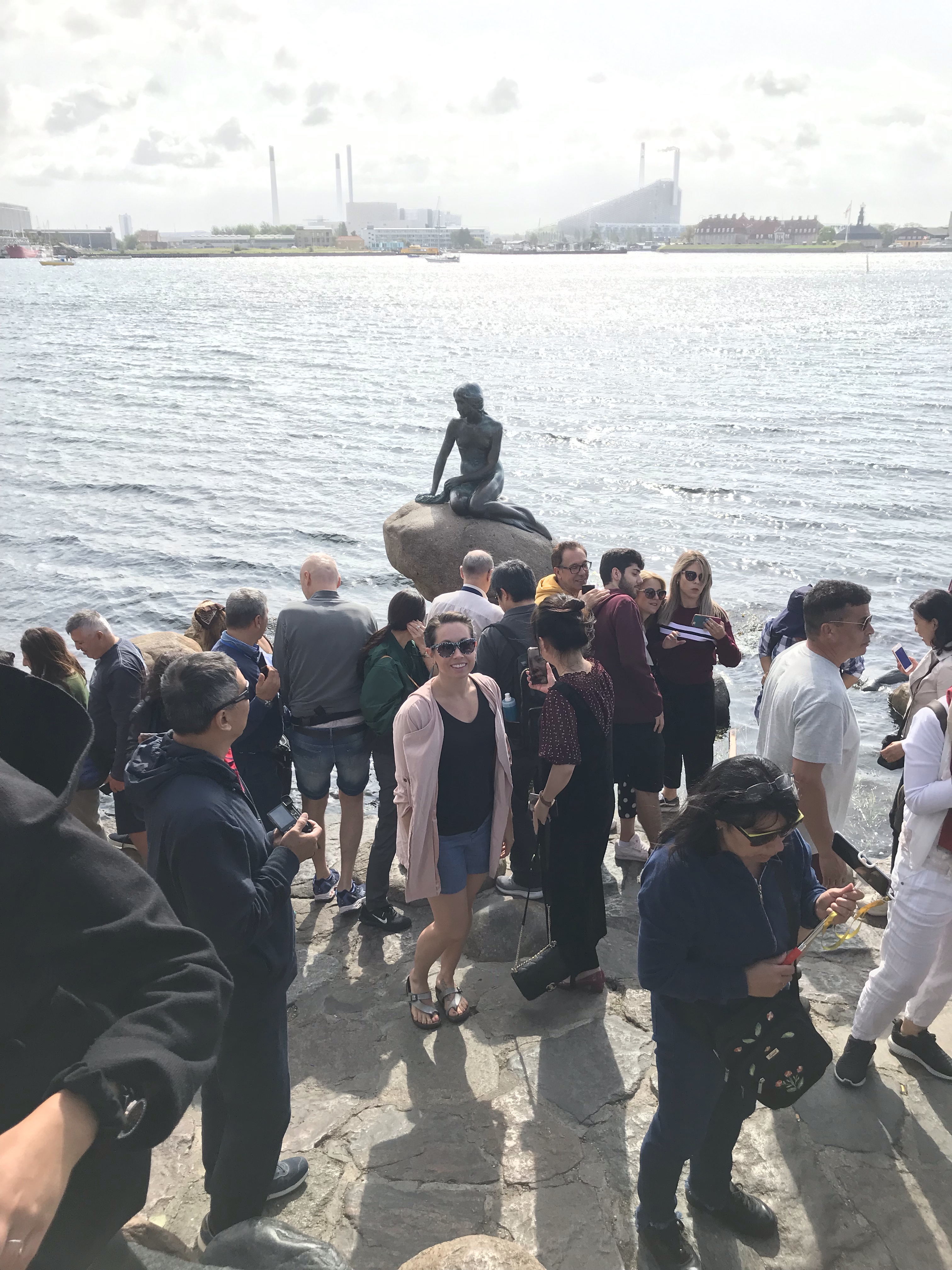 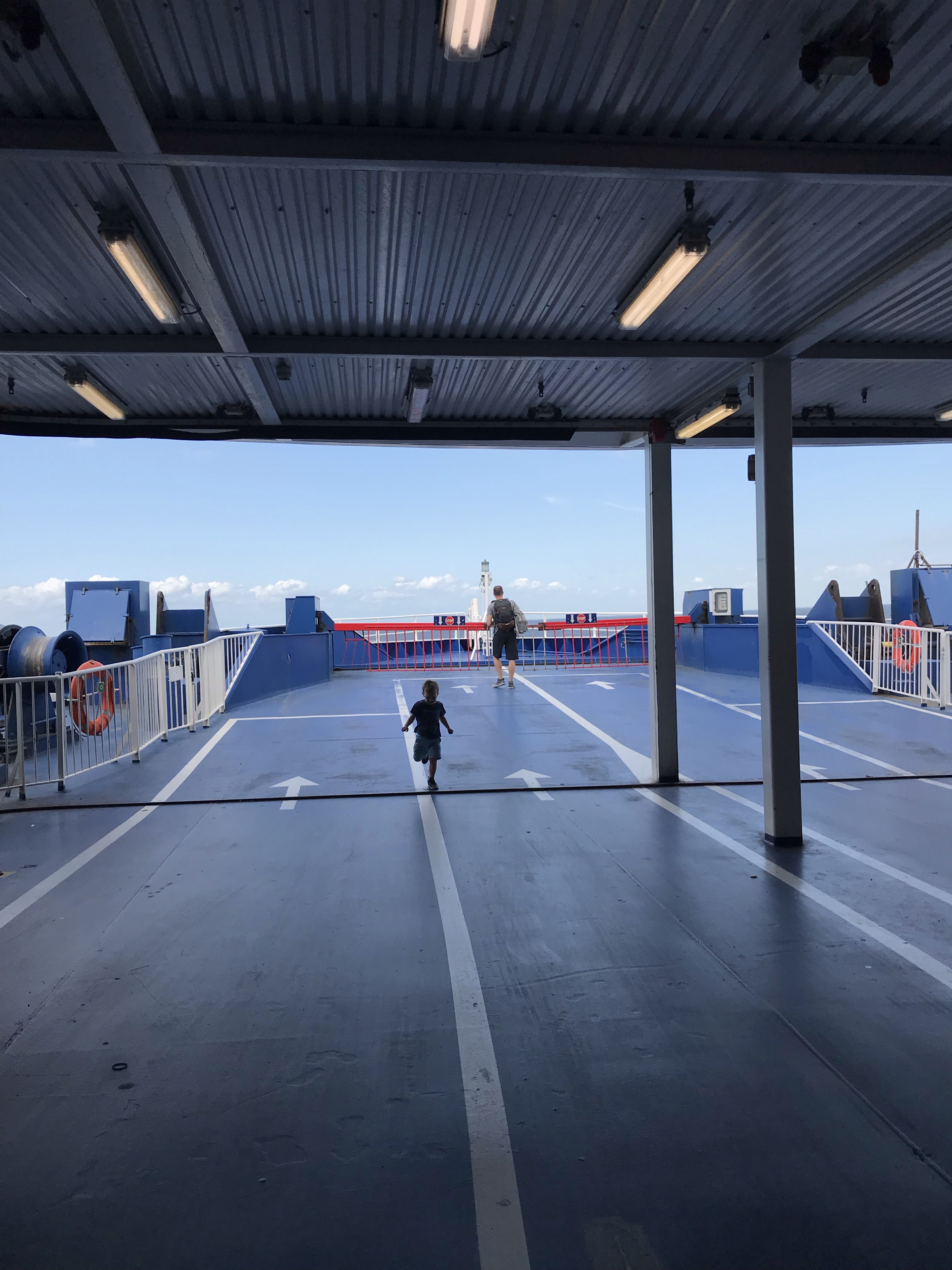 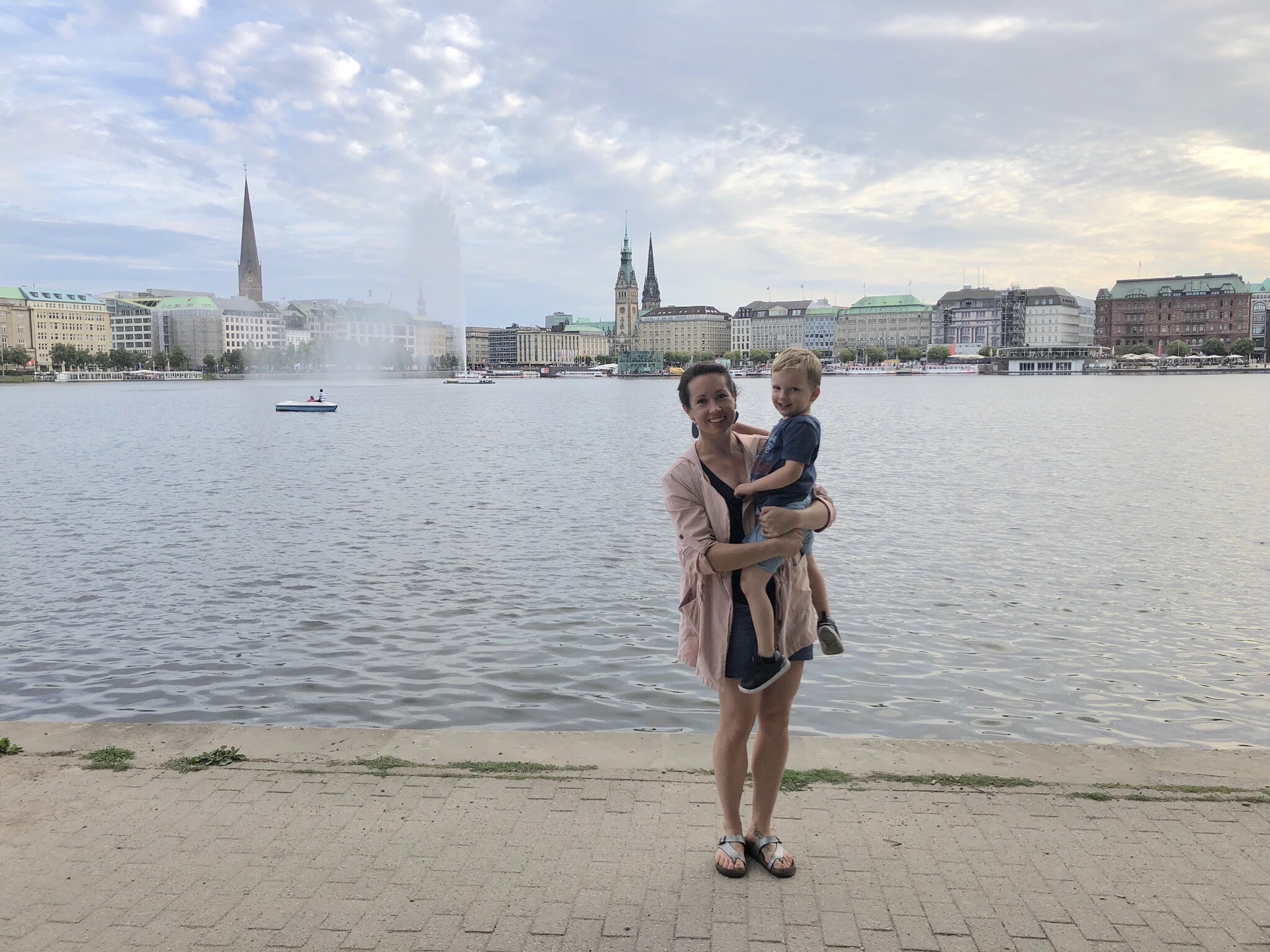 Day Four: Here are a couple of things I learned about Hamburg. It is connected to the Atlantic North Sea by the Elbe River, and is Germany’s largest port. The city is built around a large series of canals. Canals in Copenhagen. Canals in Hamburg! See, now you have just a little more expectation of it than I ever did. Walk along the canals, over bridges, and take in the new and old architecture of the surrounding brick buildings. Wander through the grounds of Saint Nikolai church. Bombed in WWII and kept as a memorial. And enjoy sitting down for coffee at a coffee roaster in an old industrial building with windows opening above one of the canals.

Next to the coffee roastery, in the same industrial building, lives the hands-down best thing we did in Hamburg, and one of my favorite things we’ve done since arriving in Europe, the Miniature Wonderland model train museum. I don’t know how to describe a model train museum and make it sound like a place you absolutely must not miss. The twenty thousand plus 5-star reviews on Google convinced me to give it a go. At the very least, I figured my three year old boy would think it was neat. Um. It held my three year old’s attention for over two hours . I’m pretty sure the only other thing that would hold his attention for two plus hours is unlimited access to Paw Patrol on Netflix. And even then, he might come asking for snacks. It was magical.

When you visit, you go around the world via model train exhibit, after exhibit, after exhibit. The details are absolutely incredible. Miniature proposals on ship decks, Pinocchio’s nose growing right out the front door of Geppetto’s itty bitty workshop, the world’s smallest nude sunbather. An entire Vatican City. Swiss Alps complete with gondolas and the American wild, wild West. To name a few. Every so often the overhead lights in the room dim to black and as they do, the lights in the wonderland turn on for a sparkling change of scene as the miniature world goes from day to night. Ah, I loved it so much. Anywho, wish my Grandpop could have seen it. He had a model train in his basement when I was little and so maybe part of my delight at this Miniature Wonderland was nostalgic. But I think not. 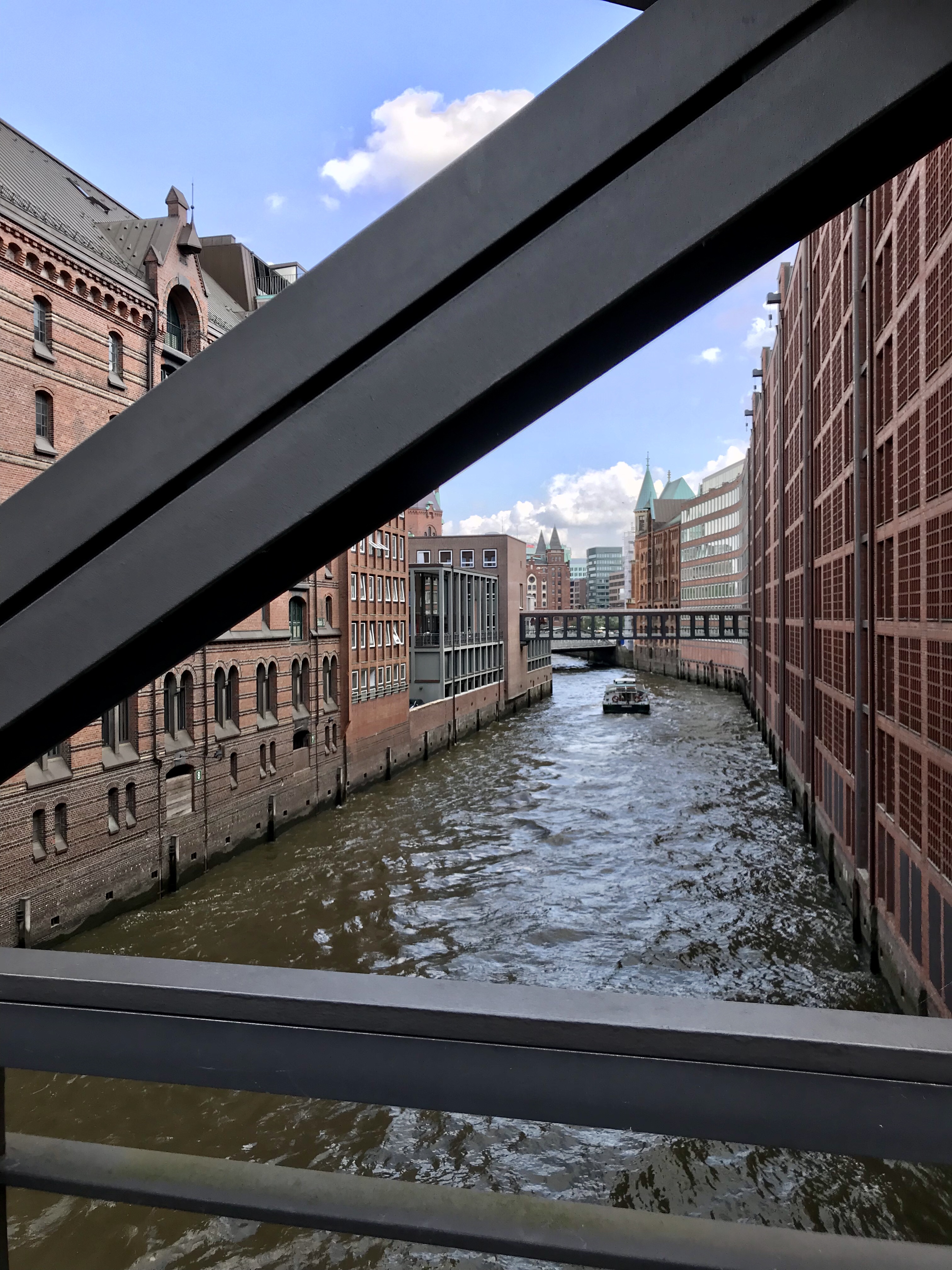 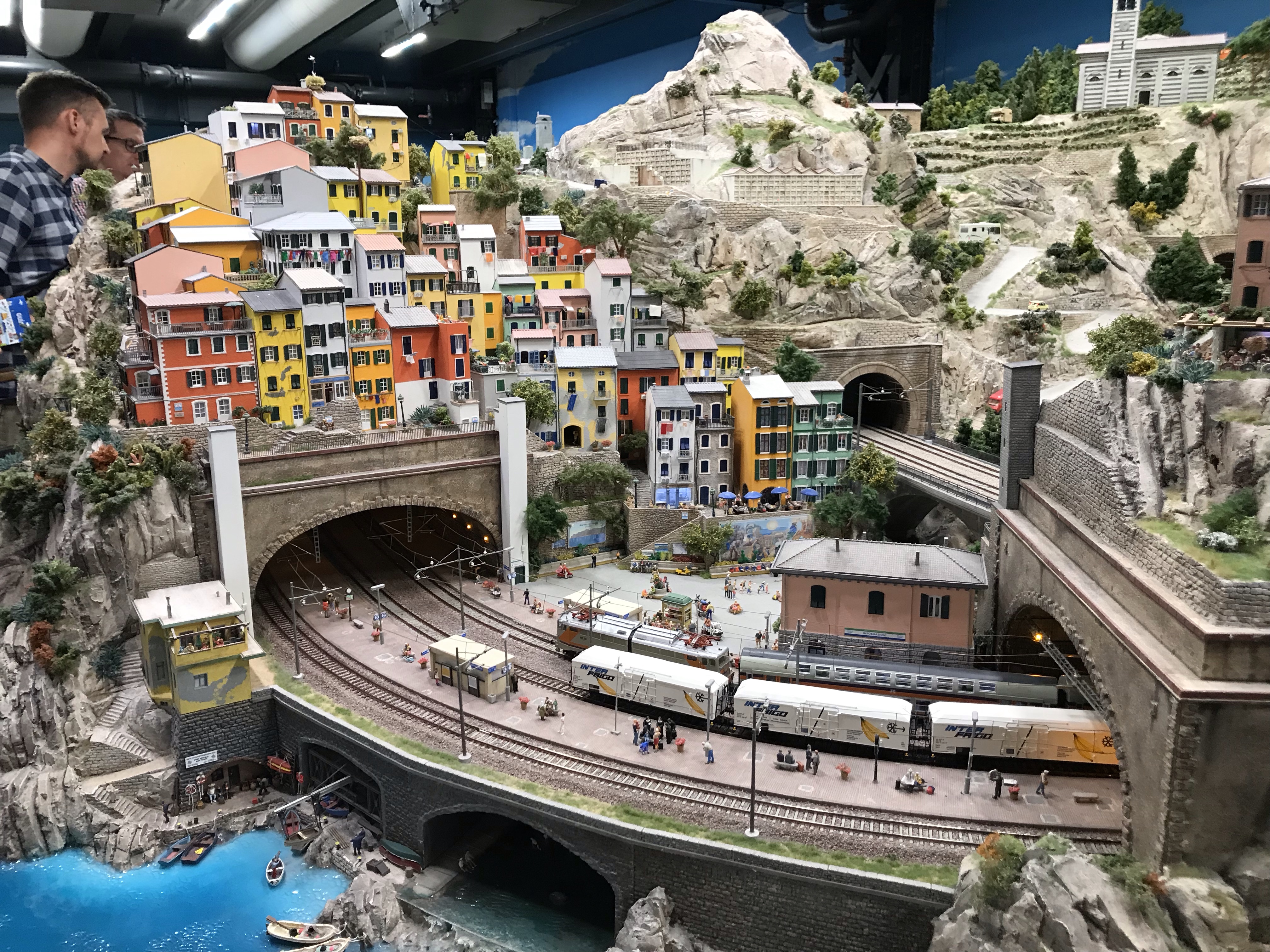 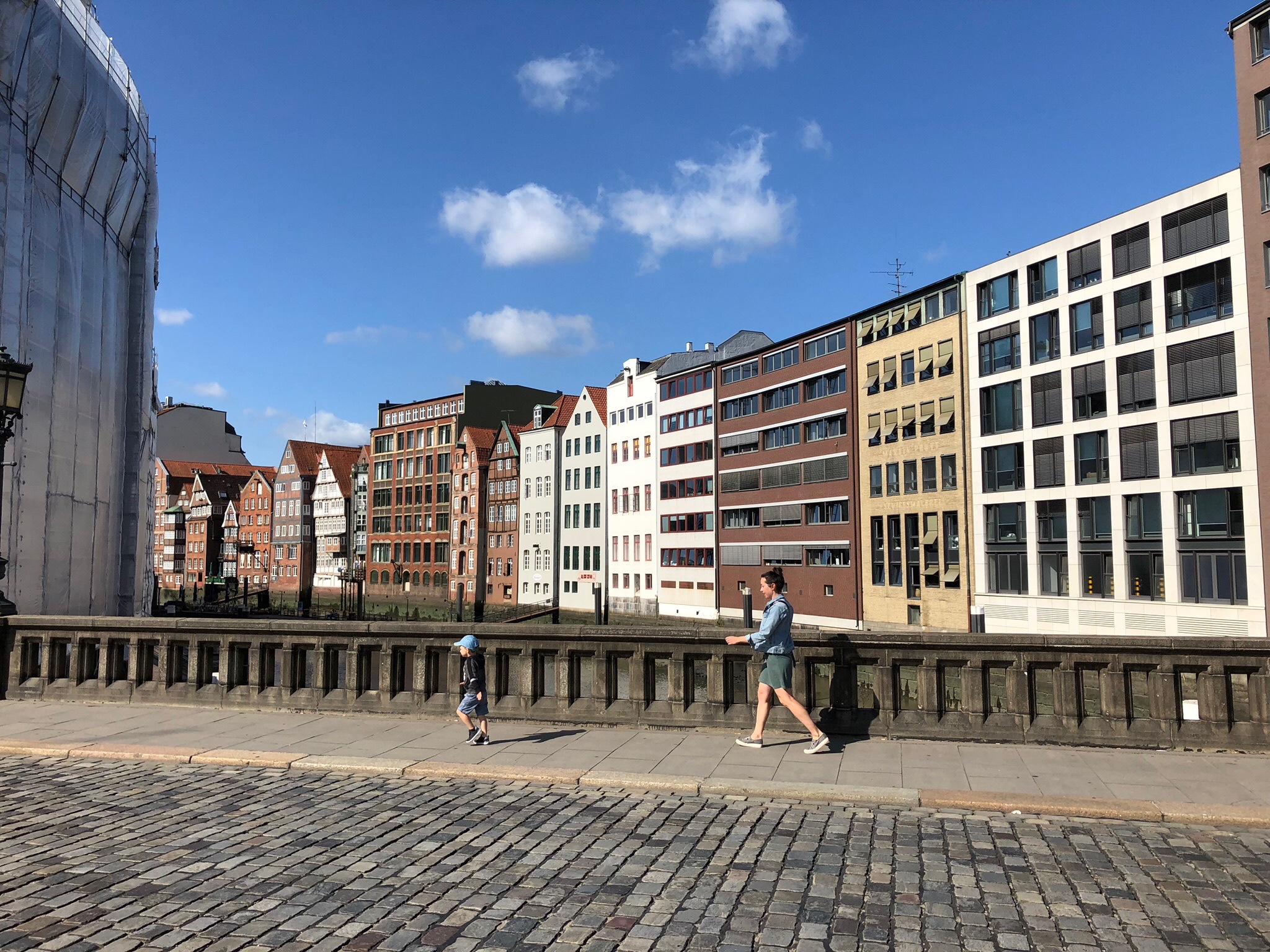 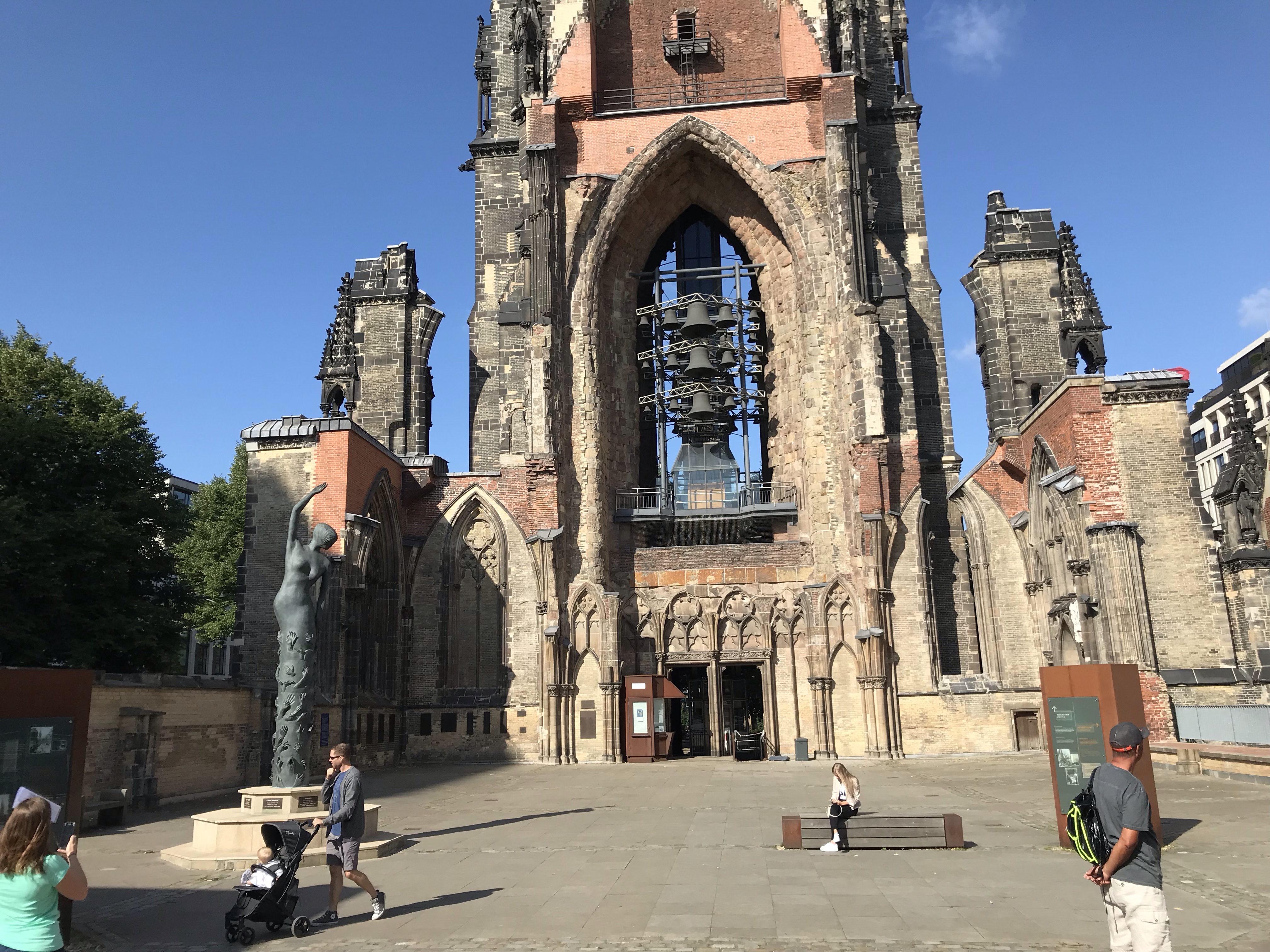 This is where the road could fork with endless possibilities. We hit the highway back to Szczecin, stopped for gas and lunch in what turned out to be the postcard perfect town of Wismar in Germany. You could complete the loop as we did, or from here choose your own adventure. Swing down to Berlin or make your way to any number of German cities. Head west to the Netherlands and Amsterdam. Welcome to the inner workings of my mind. Take a look at the map and see where you might want your journey to take you next. The possibilities are endless, they always are. 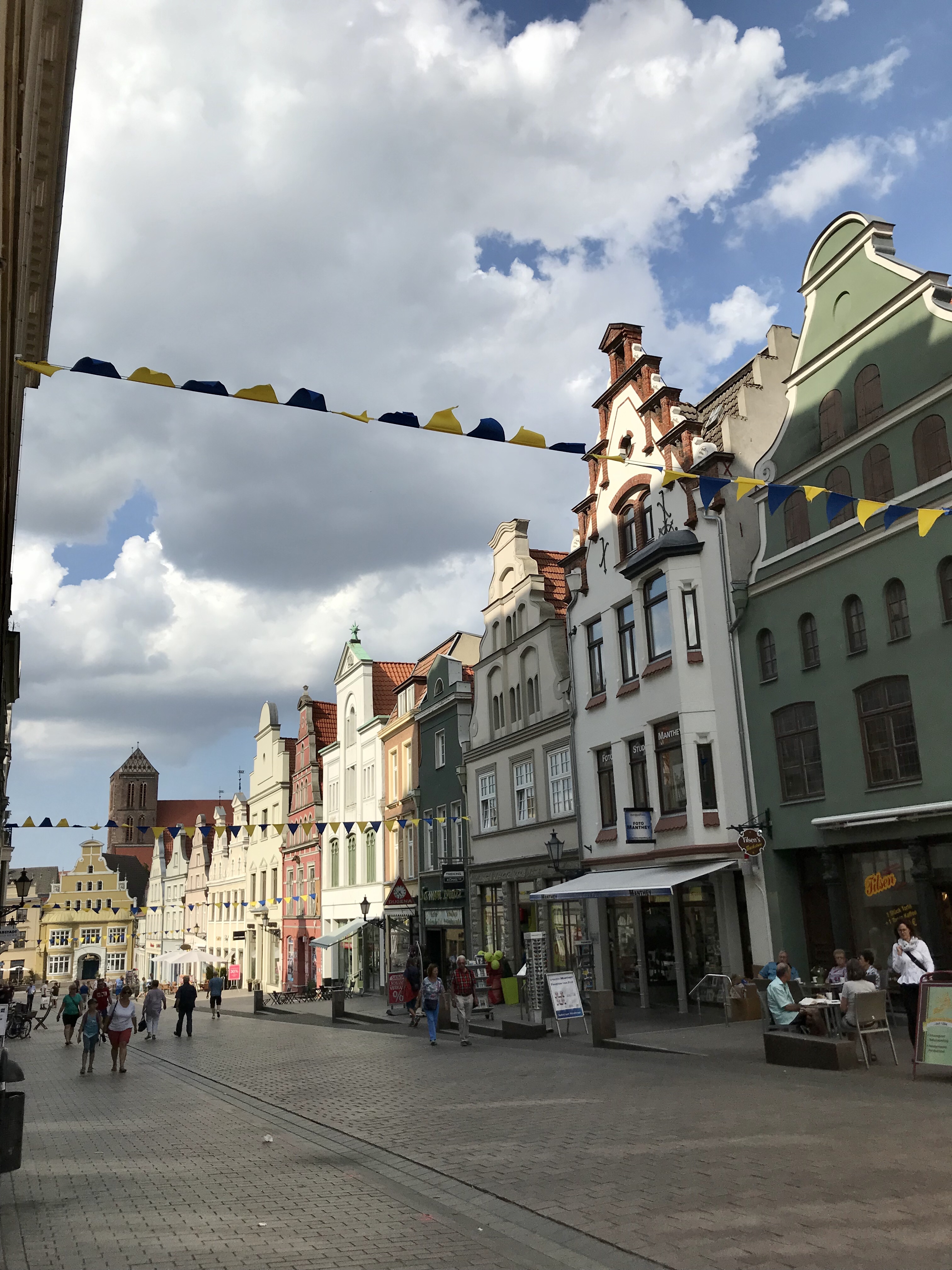