This is a text widget, which allows you to add text or HTML to your sidebar. You can use them to display text, links, images, HTML, or a combination of these. Edit them in the Widget section of the Customizer.
Posted on April 19, 2019 by exploremoreco.

This morning at the end of yoga class, when you’re just laying there feeling really good and relaxed and supposedly emptying your mind of everything (…isn’t that so difficult?), The memory of Lake Crescent on Washington’s Olympic Peninsula randomly popped into my head.  As I lay there, I could picture it so vividly. . . the clear emerald water, the mountains dropping right to the shore, yellow leaves falling off the tree and landing on the surface of the lake and the friendly duck who just would not quit. Maybe the tranquility of the memory was triggered by the tranquility of that post yoga moment.

Lake Crescent and Lake Quinault are two gorgeous, easily accessible lakes on the Olympic Peninsula. Quinault seemed like a good idea on a hot afternoon in the late summer, so I drove from Olympia, where I was living at the time.  It was about an hour and a half drive. When I got there, I found the Lake Quinault Lodge and wandered down to the Adirondack chairs lined up at the water’s edge. I spent a soul-cleansing afternoon reading, swimming and all-around relaxing.  I also took a short hike nearby to the Quinault Lake Spruce. A Sitka Spruce tree over 1000 years old and the largest in the world. Photos could not do this behemoth justice. It was in itself, worth the trip.

I had grabbed an area map from the visitor center there, and noticed a road circumnavigated the lake. I thought, “cool, I’ll take a drive around the lake and see what there is to see”.  The road quickly turned from blacktop to dirt to two-track to no cell service. I got a little nervous. With trees on one side and a roaring whitewater river on the other, I had nowhere to turn around. I pressed on in my Ford Fusion, hoping and praying that the bike on the trunk rack wouldn’t come loose as I bounced over the uneven “road”. The “road” eventually cut left, and after crossing a bridge with epic views of the river sweeping down out of the Olympic mountains, turned back toward civilization down the opposite shore. I chalked it up to experience. 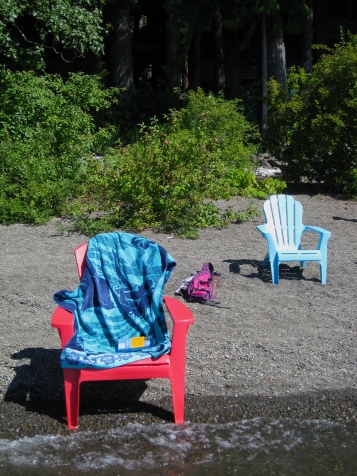 I visited Lake Crescent twice, once mid-fall, and once in late-spring and both times experienced the cool, wet, dreary weather one expects from the Pacific Northwest. When I reflect on Lake Crescent, I keep remembering the feeling of awe and peace and an extreme urge to dive in to the water despite the cool temperatures and my clothes and my rain boots.  The water is the deepest emerald and the mountains plunge straight to the waterline. Some of the most beautiful scenery the world can offer is mountains plunging straight down into a shore. Think about it.

The first time was an out-and-back day trip with a few friends to explore the Peninsula. The second time was on a girl’s weekend getaway. We again, sought out the Lake Crescent lodge and made use of their Adirondack chairs.  This time with a paper cup of wine and a book and a dear friend. It’s hard to think of anything more relaxing. There were two hikes to waterfalls nearby. Both easy, relatively short, through the rainforest.  Take a look at the map when you get there and choose your own adventure. You really can’t go wrong. Pacific Northwest hikes are magical, the trees are humongous and everything is drenched in green.

To get to Lake Crescent we drove from Seattle and took the ferry over to the Peninsula from Edmonds to Kingston, WA, then followed US 104 to US 101, which takes you right there. The lake itself is located just west of Port Angeles.  I would love to return one day and stay at the lake lodge. Perhaps in the Summer when I could give in to the urge and finally dive in. 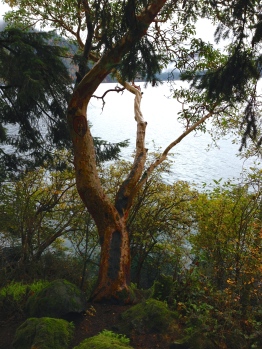 One thought on “Olympic Peninsula Lakes Crescent and Quinault”